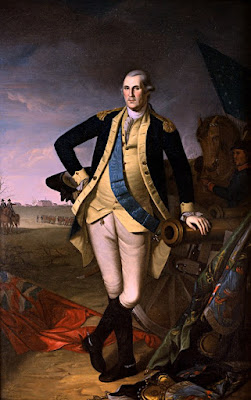 As many of you know by now, this week, beginning last Sunday, Presidents Day Eve, no less, Feb. 16, 17, and 18th, at 8 p. m. ran a three part miniseries documentary aptly named, "WASHINGTON." Although I wasn't able to watch much more than part of the first installment, for the damnable reason of having to take on a bunch of O/T on another shift. Actually, don't worry, but I have been none too well lately with a couple of pesky health conditions, too. So I may need to tread cautiously in stepping out of the woodwork, so to speak.

Nevertheless, here's my brief take on it:

Early on, the show appeared fairly accurate and freshly focused. Good so far, though not without a few minor problems of which we will only examine one or two.

I am rather sure, George Washington met the Half-King earlier on his trip from the future Loyalist, Lieutenant Governor of the Virginia Colony, Robert Dimwitty, er, ah, Dinwiddie, ahem, to a bold expedition north past Nemacolin's Trail up the old "Forks of the Ohio" where Pittsburgh would later be founded, then on to Erie to meet with the French leaders to discuss abandoning their claims to the region. Of course, this attempt was a failure.. Point being, they portray their meeting in a meadow, whereas it is traditionally reported and thereby generally accepted it should of took place at Half-Kings Rocks. Also, the impression is implicitly implied in which they hardly knew each other beforehand. Not so, as there is more to the story. At least this is what I believe was intended by the portion observed the other evening.

To me, the only main faults that appeared obvious, so far, would include a reminder much of the "Ohio Country" is centered in western Pennsylvania. This is the region the Ohio Company were lustily bound for in surveying so much land.

I would seriously question why a British actor, technically hailing from Edinburgh, Scotland, would be chosen for the spotlight in the docudrama to play the lofty Colonel/General//President, George Washington. Nicholas Rowe has only really appeared in a handful of TV shows and movies. Most noted is his lack of looking anything , and I do mean anyhting like Washington. C'mon, even his noticeable lack of prominent jaw and dignified demeanor, let alone the overall body shape is totally wrong. George was also known to have a bit of paunch around the middle, especially in later life. Rowe is tall...OK...

While Colin Powell is a rather welcome levelheaded figure, our (other?) impeached President, Bill Clinton, even though a scholar, is hardly the choice you would think of for commentary on our first Pres., clearly of dubious character and not exactly a fount of moral integrity, if only given a smidgen of thought by the producers. And his ignominious wife will not be regaled here. Ah, yes. You do not have to be a Republican to see the poorly chosen contrast. Period.

We aren't necessarily required to go to the lengths of Coe's book, "You Never Forget Your First:A Biography Of George Washington", reviewed by the New York Post, Feb. 15th, 2020 at 3:00 p. m., which concerns, among other controversial matters, how badly he treated his slaves. I for one am not convinced if this was as bad as it is portrayed at times. Although definitely a shame if true, they must consider the fact they were slaves after all, in the middle of a difficult process of a more barbaric age of such cruelties. Furthermore, many Virginians like himself owned a disproportionate amount of land, most of these interlopers, ignorant though they claimed to be, to the fact this was in actuality Pennsylvanian lands before the Mason-Dixon Line ended their egregious pipe dreams once and for all. For when soon the Penn's, et all, declared slave ownership wrong and needing to be curbed in this state, the Virginians and some Marylander settlers were aghast and quickly hightailed themselves and thier goods south and west onward to Kentucky.

Oh, Washington did have his slaves freed on the death of his wife, Martha.

Another issue concerns Tanacharison, the Seneca leader, who being well bolstered by Wasington's enthusiasm to activity in the nearby above mentioned Jumonville Glen, is harshly judged. The idea of a proper "massacre" that took place there, though the Half-King did make it a formidable attack, this his much lessened by the capture of twenty-one French soldiers out of a total of thirty-one.

So then, Washington's intercession may likely of been a large factor in this leniency of violent surprise attack and swings the case more in his favor than against his cause. These French claimed they were on a diplomatic mission when all hell broke loose, scalping their leader, directly heading on to a broadly fought world war. Yet, to be fair, a suspicious condition of their position cannot be denied where they were well hidden with their campfire below the Jumonville Glen ridge and oddly well placed near to where Half-King held his regular headquarters in the large boulders above. This indicates they may well of been spies under cover of diplomacy as a second cover.

Another point mentioned was that not everyone appreciated Washington's behavior, especially so during his presidency, since even John Adams, the vice-president and next Executive commander of the United States, basically stated that he "was too illiterate for his station." Jefferson sure made himself a thorn in the side of Washington for years as a part of his Cabinet too. Still, there are always difficulties and disagreements in every political office, particularly so with the job of the being first in his line of office and he wasn't quite as polished as he could of been.

Indeed Washington was an ambitious colonial man, (he did marry 'up' into wealth with Martha Washington), who had made certain  miscalculations. No he wasn't perfect either as proved by his loss at Fort Necessity. On the other hand, he was a brave soul, for instance he saved what he could of the disastrous march of General Braddock, and did learn from his errors well enough to become a great man of ingenious vision and admirable dedication. Personally, I still like to picture him on his knees at Valley Forge, deep in prayer. I guess that's just me. Maybe you too! He was deserving of praise for many things. He still deserves our respect. For all his supposed pomp, this tremendous 'Father of our Country' refused to become another crowned king. That says volumes.

Well folks, I plan to see about a recording by Friday, (more overtime AGAIN though), if I manage it, or grab it online as I wouldn't mind catching the whole thing soon. Well, let's hope the rest I missed gives a fair and accurate telling of his time in an alarming war against superior odds and his presidency's tough decisions.

Whatever our opinions it is a good return to form for the History Channel.

As always in the past, please post your comments and pass on your thoughts of this three part miniseries. Do you feel these points are valid? What could of made the documentary just that much better?

Keep in touch and let me know in the section below!

Posted by histbuffer at 2:22 PM