Old Cabin in the Woods

Hello fellow history buffs. I know, this is only the 2nd article for 2019. Please continue to stop by, you never know when I will get to a few other long planned on posts. Whether you are new to this blog or you are an old loyal follower who have been impatiently hoping for more insight on Fayette/Westmoreland Forgotten History, I hope you are all fine and in good health.

Although these photos go back quite some years hence, this was a draft that hadn't seen the light of day. One reason for that: a difficulty in discovering exactly who owned the site as it changed hands since many years ago when, even then, little was known of it. I'm not providing GPS coordinates as much because of the murky condition as concerns any  recent land owners and all that. The post is finally uploaded in the name of research and historical interest.

All the info I have available is it is quite old, but how old, I do not know, and it was in the 'Rhodes', or 'Rhoads', family for many years. When I and my brothers were little greenhorns an old lady and before that, an old man lived there, deep in the woods on Walnut Hill in Upper Tyrone Township. There use to be a larger lane down into the woods where every so often the old couple had groceries and other items delivered to their area. Well, unfortunately that is about the extent of my boyhood memories of the place.

Any aware of further information, be sure to contact me.


I was just feeling cooped up, so I took a corner of an afternoon to check the Walnut Hill area referred to in a previous Histbuffer post. Briefly, this primarily concerned the Braddock Road and the Turkey Foot Road, dwelling at some length on the historic and fascinating likelihood they may of actually crossed on or near Walnut Hill in Upper Tyrone and bordering Bullskin township.


To give a little explanation, I strode off the road for a bit of fieldwork and felt immediately better to be out in nature. Whether you are hunting, hiking or just taking a stroll, there's something about the solitude and simplicity of going it alone in the woods that can really lend toward an advancement of your peace of mind. And I don't mean scanning pages of woods and snow online to grab a nice screensaver, occasionally spacing out and sighing now and then. No, sorry, that doesn't count!

I started on the top of the hill, (an obvious beginning or ending, depends on how you look at it), where there is a remnant of the path leding from it's joining to the modern Kingview Road. To the east, this old route appeared to make a connection on a few maps, modern overhead photos, as well as 1939 aerial photos, to join the Kingview Road again from a few hundred yards downhill toward the paved main road on the way to Rt. 119. I had plans to eventually finish with this region in a future article. There use to be a much clearer pathway, wider in size, but you will have to take my word on that. Please, do keep in mind, not many know of the route, excepting a few that lived here a fairly long time ago.

Soon I worked my way down into...thorn bushes. HUNDREDS of them! Pesky, innumerable, from all angles, and...sharp. So, I took it slow and hesitantly, followed the trail through there. It appears to branch, then is more difficult to perceive. Later, in a rise toward the south there are a few roads that are were probably mine or farm roads.


I would suggest no one actually attempting to duplicate my trek, let alone bothering to go through the trees and thorns from Beauty and the Beast's enchanted castle and simply go by what is shown here. Heck, some might just get lost in there. After a few weeks they will probably find their way back out. Maybe they will of learned about wilderness survival and camping, even though they are a quarter mile from a main road! If you are an experienced woodsman, or woods woman, you might be alright, otherwise, even with a compass (that wasn't part of my few items), it is a bit of a maze. Anyway, a warning, as unless mountain climbing is one of your serious hobbies, no one should attempt heading in there at the pole line to the north of where I did as the descent is extremely steep and surely much worse with the mud and snow of winter. The one advantage was minus the snakes and bugs of warmer months.

Specifically, meaning, the path along the high, southern ridge staying in the very thick underbrush, to the point you couldn't get a photo without using a machete, while the lower, more northerly branch heading off eventually toward the old cabin, while further on, a deep hollow that can be a dangerous if not carefully skirted around to the west.

The area I found it in, after so many years of where I was reminded that it was suppose to be, wasn't quite the place I expected to come across it's whereabouts. So, you might say, I was a bit disoriented or whatever, but the case remains it was further up the hill than I had anticipated. No, I'm not perfect, let's put it nicely, shall we? But, I wasn't quite lost either..

Again, no one I know of seems to be aware who exactly owns the old property these days. No harm was meant. Of course, not all that long ago one could freely hike these woods. No hunting or ulterior purposes were involved. If an objection arises to this post, and will do my best to respect the wishes of the owners as has been done to this point. 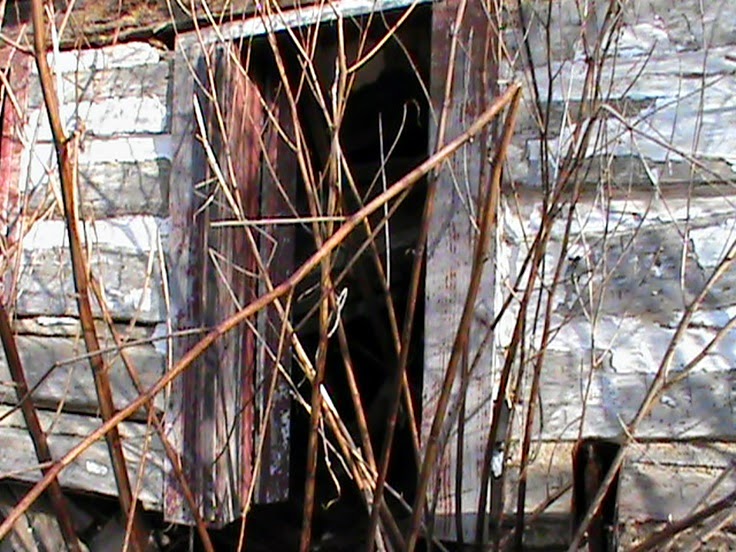 The cabin, last used by an old couple by the name of Rhodes, or Rhoads, was to the last inhabited by the woman until her last days. By the way, if a Mr. Hall(?), or whatever the name is on a few old postings, I didn't see any other until meandering well past the cabin location and am an innocent guy who generally minds his own business, alright? The old landowner around these parts was a friendly man who had no qualms about traversing the hillside. I also saw no other person on my journey through some of the woodlands. Thank you.


I was rather surprised to see that it did have electricity back in the day! 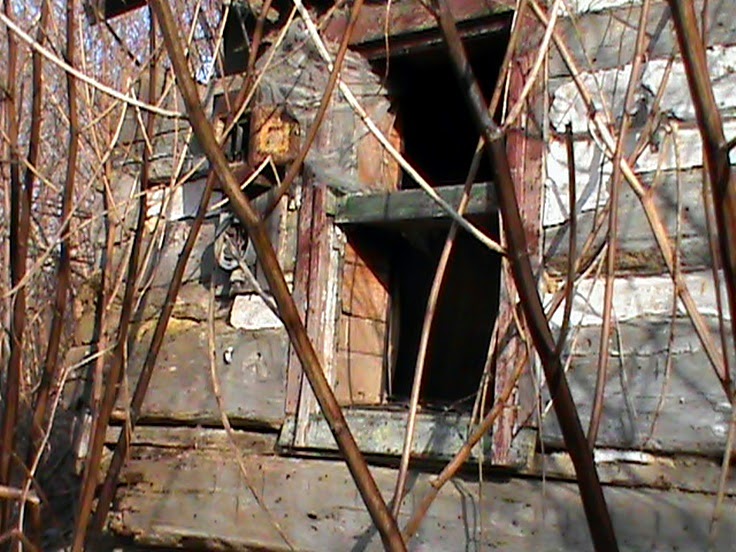 The place is very deteriorated. Because the ceiling is fallen, there was no temptation to go inside. There was wood and junk under the floorboards. 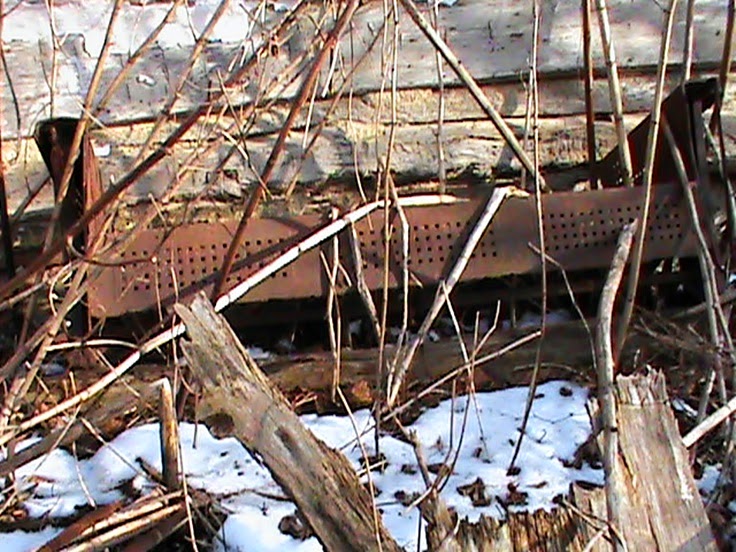 The well was still there, though I was stepping a bit gingerly.


I followed one pathway until it was difficult to be certain of it's whereabouts.Then I caught pieces of a path or road off and on through to another, more easterly ridge. That's where I saw a few postings. Keep away, you are NOT wanted here! So, I did just that which changed the trajectory of my quest to going in farther down Walnut Hill and walking up in a ways. I noticed what appears to be a scar or trace in the cornfield. This looked interesting. It is easier to perceive and more noticeable in three dimensions from various angles. Here's a photo: 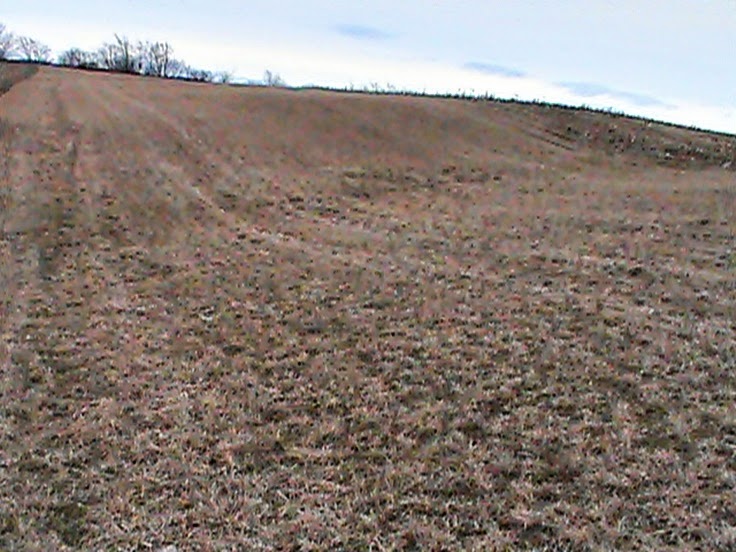 Later on, I met a man at his residence coming home from work and realizing that I didn't have much daylight left OR permission, I promptly asked him about the road entering the woods back behind the houses. He told me he had only lived there for ten years, doesn't know the ownership situation but pointed out a house where some elderly people live that might have more knowledge. Quickly, it hit me, I know those people! One of them, Dolores Mailik, I had been in the Laurel Art Club with back in the 1990's. Yet, I decided not to bother these folks too much. So I put off any re-acquaintances until maybe a time when I was cleaned up and more presentable to ask if they know if it is alright I check the road down there for a pace or two, as it could be indicative of a clearer perspective of how this road originated. 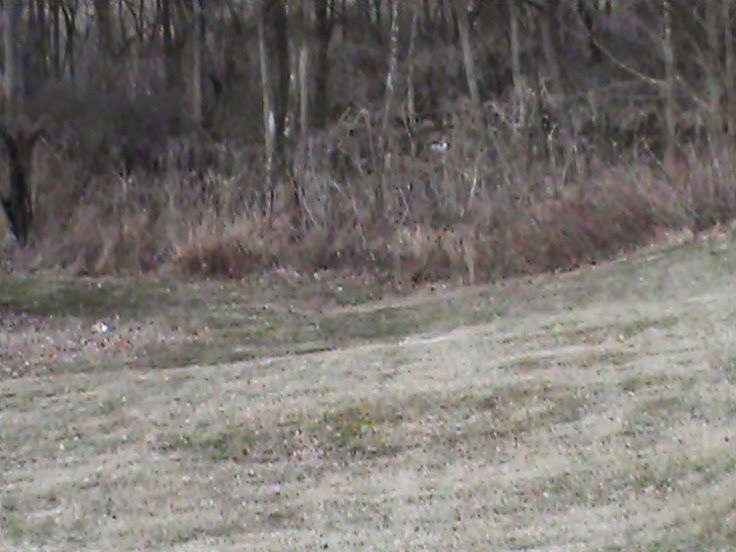 What concerned me most is the lack of rutting in the old road in those woods, as much as I could discern anyway. Such is often a feature of the Turkey Foot Road or the Braddock Road remnants amid steep terrain.There are logging or farm roads on the hill as well, but the importance and significance is not known to me.

Yes, ladies and gentlemen, the jury is still out, and may never convene on how much importance can be gleaned from our limited observations and lack of knowledge, which includes understanding of carpentry and building acumen. In general, these photos and a bit of familiarity with the lay of the overgrown hills and hollows is all I acquired by my rambling camera trek in the heart of February, a lot of years ago. Nevertheless, I felt relieved to of once again seen some of this first hand. In fact, I enjoyed the small excursion for what it was:

a minor attempt to learn something more of the Turkey Foot Road through this particular region and a chance to get out from a case of cabin fever and check out an old dilapidated  cabin of a different sort. Underlying this, is the real possibility the TFR route went further down toward the northeast around Kingview. The jury hasn't yet been formed to convene on such an alternate course as that, with the basic deduction of very little to go on for now.

As always, keep the emails and comments coming, they can be the life blood of a good old blog, and are truly appreciated! As for my recent lack of posts, priorities are what they are, so I will leave it at that. Take care, enjoy the rest of the summer, and I'll be back (some day!), for another excursion into our regional history on the next post, folks!

Posted by histbuffer at 7:09 PM