Below, my friend, Jeff Hann, responds enthusiastically to a series of 10 questions posed by me.

In case anyone does not recall or hasn't read the older posts (shame on you!) back in late 2014, Jeff Hann discovered what is very plausibly portions of the Turkey Foot Road up on Quail Hill and  old Hawk Road. Closely connected to this, Mr. Dietle, Mr. Hann, Kim Brown and myself were interviewed by the editor with the Mt. Pleasant Journal. Jeff Hann, Lannie Dietle, and I were doing fieldwork together a few years ago and located a further portion of this ancient and storied roadbed, while Jeff later found yet another part of the TFR as well. This was a unique historical accomplishment, especially toward our local region.

I also submitted an article, I believe it was in the spring of 2015, with Jeff's help and Lannie's guidance for the Bullskin Historical Society Newsletter. This apparently proved quite popular which described the more exciting highlights and their various implications.

If there are any answers, (or questions for that matter), which fans of the blog and this detailed subject are not totally familiar with or aware of, please take a few moments to refer to these links:


Any other comments or inquiries can be made through the blog or send an email to www.histbuffer@outlook.com. Now let's get under way: 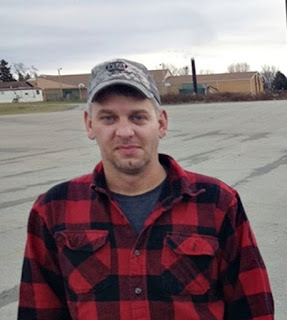 
1. How have you and your family been doing and what have you been up to lately?

Everyone's good, you know how it is after you get so old ,everything basically stays the same, go to work, come home, eat, sleep, repeat!  HAHAHA!  But seriously, work seems to be the main focus these days, along with just meeting up with friends on weekends and some evenings for dinner and a few drinks.


2. I sure understand where you're coming from. While I was excited to have the experience in late 2014 of walking much of the route with you on two seperate occasions, once in the presence of Lannie Dietle, author of "In Search of the Turkey Foot Road", how does it feel in retrospect of the last few years having discovered a part of the history of the Turkey Foot Road? Does this knowledge still have any major impact on your life?

I'm still excited about it and still a little taken aback by the whole experience. At first I thought, ahhh no big deal , but when Lannie Dietle actually flew in from Texas to walk several different locations with you and I it kind of hit home that this was a big deal. I take pleasure in the fact that Lannie named me in his book and referred to that part of the TFR as "The Jeff Hann portion of the Turkey Foot Rd." As far as having any impact on my life , not really , other than the fact that I spend a lot of time thinking about where in the hell does that road go after leaving the Shultz property and heading for Dexter to the crossing of Jacobs creek. Hopefully some day somebody will find a reference on an old property deed so it will ease my mind!


3. It was very exciting and intriguing and I agree, historically, it was indeed a big deal; we can only hope more information will some day come to light.

As I am aware you do snow removal in the winter and I personally feel we are fortunate to have you in these key positions as an Auditor for Bullskin and Upper Tyrone townships, could you give a basic description of  your duties and have they changed any since you began the job?

I'm no longer an Auditor for Bullskin Twp.  I lost the bid for re-election 2 years ago. But in all honesty, I didn't lose any sleep over not being re-elected. Although it was a pleasure to serve the people of Bullskin for the six years I was Auditor, I just don't enjoy politics and the election process.

As far as being road foreman for Upper Tyrone Twp. the duties are a little bit of everything, plowing snow and salting, mowing grass at several locations and along the roads, replacing drain pipes and culverts, minor paving, maintaining  trucks, heavy equipment , and mowing equipment, minor repairs around the buildings and even scraping up roadkill now and again. I'm sure I forgot some things but we try to stay busy and do as much work as possible with the resources we have.  As far as change , I think the job will always be consistent with some minor changes here and there.


4. It sounds like you are still involved with a fairly hefty amount of responsibility to go around!

I'd like to ask, in what manner did the familiarity of knowing people and places help with the different aspects of TFR research in Bullskin Township?

Knowing people and places was a huge help, without that I don't think it would've been possible to do the research that was done. It's so much easier to ask someone for access to their property or to look at their deed if you know them personally. Knowing the area and the terrain was also a huge benefit for the fact that you know they weren't going cut a road  a certain way because of steep hills or big ravines or creek crossings.


5. Is there a specific part of the Turkey Foot route which intrigues you most, particularly concerning the TFR branches from Mick Lilley's on toward Spruce Hollow and northeast of the Shultz property?

The very last visible part of the TFR  leaving the Shultz property heading north is very intriguing as to why it snakes around the big rock ledge to the east. When looking at the current Breakneck Road it seems that would have been the more logical route especially when both Breakneck Road and the TFR crossed Butler Run at almost the exact same point. But we can only attempt to guess how much the landscape has changed since the TFR was cut through that area.


6. Was working with the GPS and directional coordinates easy, and was this acumen developed naturally (something I was slow to grasp) ?


Absolutely not , I'm horrible with GPS and directional coordinates although it is a great tool  I'm like you, very slow to grasp . It's much easier for me to relate an area with a landmark or someone's name than it is to try to find it with coordinates.


7. I am curious if you had any recent breakthroughs in the development of the route to Connellsville beyond the likelihood of a connection to Breakneck Road?

(2. There is also another road bed branching off of the center part of the fork described in paragraph one, being Englishman Hill Rd. at the sharp S turn at the top of Englishman Hill and heading south west to Connellsville. There are still many parts of that route still used as private driveways and a large portion of it is very visible on google earth .  But again nothing has been proven.


8.  A perceptive answer, Jeff and I could only add that is a meaningful description of the two probable routes involved.

Do you think it plausible that Medsgar Road from Rt. 982 to Spaugy Mill consisted, at least to an extent,  in a branch of the TFR?

No , my personal opinion is that Medsgar Road was a short cut, so to speak, from the Detwieler Mill to the Spaugy Mill. The TFR would have been dryer and shorter to stay the course it was headed on to the Spaugy mill from the known existing part at the end of the Shultz property.  I personally believe the TFR is part of the now existing Breakneck Rd. and on through to the now existing East Keefer Rd. to the Spaugy Mill. I can't prove it, but it makes sense to me. Again hopefully some day we'll find some kind of solid proof to tell us where exactly it does go.


9. For what it's worth, I approve of your educated assessment. In speculating, I sometimes ponder  further about the whole picture as Lannie Dielte has provided in his Addendum some solid evidence for the theory for two branches, possibly more, of the TFR through Bullskin and entering Upper Tyrone, and according to old historians, heading to Dexter and ton to Cherry Hill and Ruffsdale in Westmoreland County.

In your opinion, is the Hatfield/Lindsey route or branch then, from a later date than the reported Spaugy MIll route?

I think the Hatfield/Lindsey route is later than the Spaugy route for the fact that the portion of the TFR that is now known at the end of the Shultz property would have passed by the Hatfield/Lindsay route. Add to that the knowledge that we already have about where it crossed at the Spaugy mill and headed for Jacobs Creek, I have to believe that the original TFR went to Spaugy Mill first.


10. Fascinating stuff as I've often wondered a lot about that situation.

Finally, as early on, Lannie Dietle tended to help me to orient the blog better toward deeper historical info, whether or not that was necessarily his actual intention, I have recently reread his hefty book for research purposes. The last question is: have you eventually read it through, and while collaborating with him in the past, especially in consideration of  his intimate input on the subject, what observations did his influence leave you with?

I don't think I ever finished the entire book, there's just so much and to be quite honest I really focused on the section through Fayette County. I still read it now and then just to refresh my mind and to try figure out other portions of the road in the areas that I'm familiar with around Fayette and Somerset counties.  Lannie taught me a lot about old roads, such as the deep trenches they left behind from so much use with horse and buggies and how terrain didn't always deter them the way it would me as far as choice of path. He also taught me something about myself , he said something to the order of , "Jeff has a natural propensity for incisive analysis." Who knew ? HA HA!

If you don't mind my saying, likewise, I mostly focused on studying Fayette County as the other voluminous southeastern material is so in depth and in regions we are not very knowledgeable about, and am totally in agreement, Lannie Dietle has a way of teaching a person much, sometimes profoundly, and giving new insights into ourselves, as happened with myself too. You've helped in your own way also in my search for historical realities.


In summing up:
A big thank you to Jeff Hann for your candor and meaningful answers toward my request concerning this post. Your cooperation is much appreciated and will help add to the Turkey Foot Road articles and further interest while enlightening visitors and fans of 'Fayette/Westmoreland Forgotten History', and that certainly is a large part of what is discussed here. Lastly, I can honestly state, I thoroughly enjoyed this most recent collaboration and wish you all the best!

Posted by histbuffer at 9:57 PM