Charities of the Region and A Board Game

We are all human and may take the many meaningful charities in southwestern Pennsylvania for granted at times, but this would be a major oversight. I decided to briefly address this issue in the current blog post.

Although, I am hardly on the level of a volunteer with special expertise on the subject, there are many good charities in our region and recommended here are the following:

The Catholic Charities of the Diocese of Greensburg are involved on a regular basis with counseling, poverty relief and adoption and foster care.

United Way of Westmoreland County, who partner with many other smaller groups is one the obvious large ones. Remember in performing compassionate acts, there are no minor players. Our list is incomplete, but not limited to, the American Red Cross with many volunteer opportunities, programs and services; Big Brothers Big Sisters of the Laurel Region, they are a large bunch providing various mentoring programs and meal times available; another old favorite began in 1903,  The Carnegie Free Library of Connellsville working to digitize their voluminous files, and the many societies and foundations that support them. Many local ministries require a mention, like the Connellsville Community Area Ministries with Crisis Assistance, Food Pantry and Trinity House. They have the memorable motto of Matt. 25:40 which wisely states Jesus' affirmation "Truly I tell you, whatever you did for one of the least of these brothers and sisters of mine, you did for me."


NOTE: This is a general list and merely a smattering only, perhaps there are more than I am aware of with better qualities. For example, there a quite a few community health clinics in the area that do much work. You might need to look into this for yourselves. There are Family Planning groups, hospices, The Fayette County Community Action Agency. The Redstone Highlands Communities, the Overly's Country Christmas, The Boy Scouts and Girl Scouts, the YMCA still does much to help out, and so forth. Most of the charities named can be found on Facebook and Twitter as well.

In September of last year we covered some of the numerous local festivals, so this is an appropriate juncture to refer to a handful of charities.

One more detailed here deserves an honorable mention from my personal point of view. This is the ARC of Pennsylvania, which is centered out of Harrisburg. The chapter I am somewhat familiar with is the one in Uniontown and they also perform a private function, donating their services where they choose they are the most needed. They appear unique in that they attempt to integrate their work within the community as opposed to segregated institutional living, specifically toward those less fortunate with various mental disabilities. This was, in part, explained to me by a nice lady, (I forget her name and am not certain she would want it published), I happened to meet near the Public Welfare Office on West Church Street a while back.  This chance meeting decided me on making a few donations, small though they were, to the organization, then and in the future. They also receive support from the Office of Developmental Programs and of Vocational Rehabilitation. The ARC have Position Papers describing their Priorities on one of their websites you should find enlightening. There is more information to be learned than we are able to broach in this setting. Here is a list of other organizations associated with their causes.

My main point is, this fine woman came past and gave me an old ARC game of Fayette County. Dropped it in my lap, so to speak. Why, thank you! This is truly appreciated. When I am positive of this woman's agreement and in depth information, I will update this immediately.

The exciting old game ,called "Back In Time", is based on the order of the famous Monopoly Game, with the board spaces representing different historical places of interest, often noting the dates of their origin. It appears there were other Chapters with board games for other counties, and maybe even in different states. Sure, the monetary value is probably not all that much while the age is estimated at 20-25 years, but while I don't have a lot of research about these games, what a fascinating little item to have freely placed in the grizzled, waiting hands of one Histbuffer! A totally unexpected gift that led me, naturally enough, to contemplate a blog post on our charities. The Facebook page is here.

The game locations run from Uniontown to Perryopolis to Connellsville, with board spaces for Jumonville Glen, Nemacolin's Castle, Crawford's Cabin and Mt. Washington Tavern.

Here a few photos of this ARC Fayette County board game: 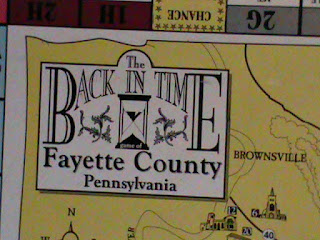 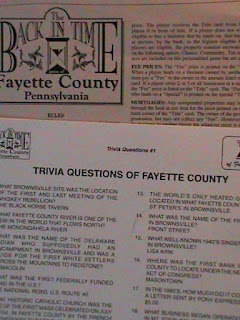 Above shows a page of Trivia Questions that was originally included with the game.

Below, a close up of a few of the spaces on the board, and the money and game pieces: 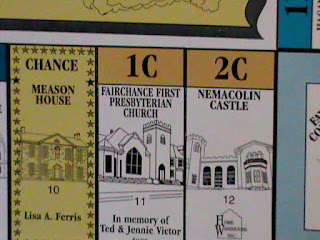 I haven't decided whether to break it out and get into actively playing it, or to keep it in the pristine condition it would be best to leave it to remain in. What would you do?

Well, what a nice example of giving and receiving in turn, wouldn't you agree with such a prognosis, folks and friends? I thought you would!

Do keep tuned to F/WFH. Soon there will be a Part Two for the Captain Jacobs story, as well as other important, and some occasional lesser categories. Might I be so bold as to state the further historical meanderings should be properly addressed , in detail- right HERE!