I do apologize if this article is not as well rounded as I would of liked. The ol' early spring virus has caught me at a bad time. This shows I am only human. The high fevers were the worst. Well, doctors and hospitial tests aside, it is to be hoped the good visitors to "Fayette/Westmoreland Forgotten History" will sill enjoy the subject matter presented here.

The Connellsville Canteen replica of World War Two is located in the Laurel Highlands off of Rt. 119, just south of the Amtrak Station on North Water Street in Connellsville of historic Fayette County, PA.The dedication of this version is from April 23, 1994, on West Crawford Avenue fifty years later, the creation of Harry Clark in  association with the Fayette Count Cultural Trust and Canteen Chairman Todd Reagan. Here's a peek at a few of the great murals.

It has a great railroad museum of the Indian Creek Valley gifted by Tuffy Shallenberger and brought from Nemacolin Woodlands with painstakingly created murals displayed with photographs. They have a unique 1936 Olympic torch and other related paraphernalia on display Nov. 22 to Jan. 10 of this year, centering around the exploits of Connellsville native, John Woodruff in Berlin and his proud moment in winning the Gold Medal.

Much of this vision becoming a reality was accomplished by Rose Brady of the Red Cross. More on her further on by a valued colleague. They could use additional funds, with the Coffee Shop and entertainment projects planned, so please, kindly consider making even a small donation! It has been estimated that the Connellsville Canteen has served as many as 600,000 servicemen!

In the heady and desperate days of the 1940's and the 'Victory Gardens' the military teamed up with the railroads and mobilized many thousands of chartered 'troop trains' for the transport of many millions of young, brave, but innocent and sometimes, disoriented soldiers, with the knowledge of their secret dispatch and routing movements kept by only a few top officials and Defense intelligence of the War Department. They generally used the specially built, (and close and uncomfortable), Pullman sleeper cars back in 1943.

Well, the canteens, as they were called, were specifically set up to offer a meal, maybe a well needed stay overnight and some encouragement from the dedicated volunteers and local nurses to the tired and beleaguered servicemen traveling through the towns and cities on the home front, often between their tours of combat duty. This was eagerly and selflessly attempted, literally, around the clock with oversight from the Salvation Army and the USO. Many donations came from the outlying areas.

So, this particular canteen from a log gone era operated from 1944-46 at the old B&O Station on the Youghiogheny River. Here they would do pick ups and drop offs, exchanging worn out crews for fresh ones and checking over the engines and refueling.

Rose Brady and the Connellsville Canteen,
by Bobbi Kramer 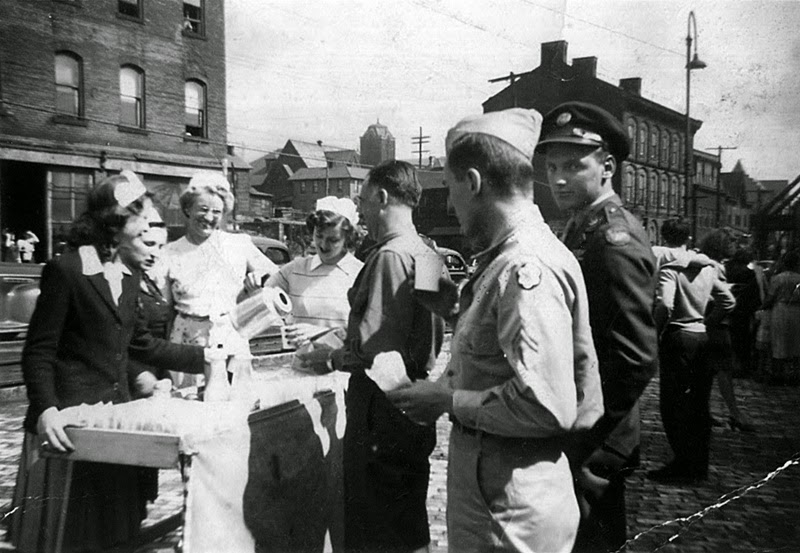 The world was at war in 1944. Many of the women of Connellsville and surrounding communities had loved ones serving abroad or had even lost a husband or loved one. But, the amazing thing about human beings is how they band together and rise above evil in such situations.

This is what happened when Rose Brady and her brother Father Frances Bailey sat down for coffee after dinner one day in 1944. In conversation he told Rose he thought it would be nice to serve the servicemen and women snacks and such when they were traveling through the Connellsville Train Station. The trains had to stop in Connellsville to get water for the engines and it was a short stop for the troop trains.

When Rose agreed, she had no idea just how far reaching this idea would take them. But, once Rose sunk her teeth into the concept of how to forge ahead, she became a tenacious bulldog with a bone. She was an extraordinary  organizer and perfectionist. This writer believes Rose was the only God-ordained person to do the job. She had been volunteering for the Red Cross in blood drives and was also in politics. She had a husband and five children - one in the service. She was known to run a well-oiled machine even at her thirteen room home in Green Street in Connellsville, delegating tasks to her family to keep things running smoothly.

She must have been a perfectionist, even in her dress. She dressed meticulously and wore an up-do hairstyle and/or a very stylish hat. A family member is known to have said she even had her own hatmaker.

Rose contacted Ira Younkin, former mayor of Connellsville, Jim Sterbutzel of the Civics Organization, James Driscoll, Editor of the Courier and Major Bryant of the local Salvation Army about having a Canteen for the servicemen. They all unanimously agreed this was a very special thing to do. They acquired the old Boyts-Porter warehouse near the B&O Train Station and tracks and put a kitchen area in it and an area for cots for tired service personnel. They hung signage designating it 'THE CONNELLSVILLE CANTEEN'. Many businesses, organizations, churches, scout troops, ladies' auxilliaries and more held fundraisers, dances and donated monies. Even children got involved. Ten year old Susie Shields, daughter of Jim and Jean Shields, said she would gladly sell her paper dolls and books in May of 1944 to make money for the Canteen. In June of 1944 she proudly handed Rose Brady the two dollars she made at her sale. her mother was a canteen volunteer and her Dad was the manager for the A&P, that donated foods, etc. to the Canteen. From the youngest to the oldest, everyone wanted to help the War Effort.

While Rose was working on the Canteen project, her brother, Father Bailey was serving as a Chaplain in the army.at the end of the War, he was at the Dachau Concentration Camp when the Allies released the prisoners. But, we can be certain he kept in touch with Rose and said many prayers for the creation of the Canteen. 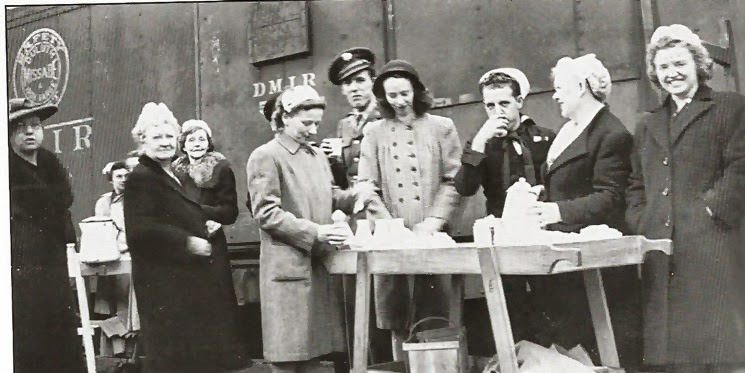 A Word on the Veteran Voices of Pittsburgh

The Veterans Breakfast Club has partnered with the Veteran's Voices of Pittsburgh, with Kevin Farkas as Executive Director of the organization. For quite some time helpers like Nancy (Sova)  Hrabak, a Connellsville local, have been involved in recording the stories and anecdotes of the old veterans in the Canteen Coffee Shop. The group, with 250 interviews and Ceane O'Hanlon-Lincoln who has won numerous awards, are publishing her audiobook 'Sentimental Journeys'.

As a son who along with my two brothers Scott and Mark, are extremely proud of the service of my own father Wayne Wilson and the enervating, sometimes humorous and often scary stories we would reluctantly draw from him and some details of our two uncles, 'Curly' and 'Cougie' my mother's brothers who tragically died in World War Two, (I plan a future entry on their lives), a feel a special interest is keenly felt. The double loss for John Hoover, our maternal grandfather and Ida Hoover, our grandmother, 'Nan', as we affectionately referred to her, left them in an emotionally distraught condition for quite some years, I strongly feel this is very commendable work, in my humble opinion.

You can check out some of the stories of the Veteran Voices here with podcasts and the preservation of a unique and growing collection. There is much information and featured veterans to further your awareness. Also, with touching stories, like from Congressional Medal Of Honor winner, nurse and WASP, Florence 'Shutsy' Reynolds, and Gunner's Mate, Guy Tressler of the Naval special forces.

I say, V for veterans and V for victory!

Posted by histbuffer at 4:25 AM