We are back in Westmoreland County, Pennsylvania with Jeanette. Between routes 30 and 22, and approximately 25 miles to the east of Pittsburgh, this is almost a city "made" of glass; a suburb of the Pittsburgh metropolitan area.


Above is a photo of Clay Avenue, named after financier Richard Clay. Many of the streets were named in honor of the initial investors and those responsible for incorporation of this city.

Some Historical Developments in Brief

I admit to not knowing a whole lot of its early history as of yet. But, here I'll relate as much as can be acertained.

Lying near the geographical center of Westmoreland County, the city was founded on June 7, 1888. Jeannette was once named after the founder's, (H. Sellers McKee), wife, Jeanette Hartupee. He co-founded the Chambers and McKee Glass Works, starting out by buying up 500 acres of land. Soon this was a booming community.

Consisting of 2.4 square miles, they have their own Police and Fire Departments, schools and eight parks are scattered throughout the area. Among those are Buster Clarkson and Byrnes and Charles Graham Park on South 6th and Mill Streets.

Near the Bushy Run Battlefield, which served such importance in Pontiac's War in the hot August of1753, as Colonel Bouquet, under Forbes, contributed greatly to prevent the capture of Fort Pitt, keeping the region much safer from Indian attack and intrusion against colonists and settlers of western Pennsylvania. (John Boucher, History of Westmoreland County).

As numerous glass plants found their home here, the place became famous for being "The Glass City" and the first of its kind in the county. From the late 1800's its stature rose with incredible amounts of manufacturing.


A City Growing Up

All told, at one time there were seven glass plants in production here, including the Pittsburgh Lamp, Brass and Glass Company and, of course, Jeannette Glass. This city led the way with these and other phenomenal accomplishments. With the help of the railroads, in 1938 that also led from Greensburg to Irwin and Trafford, it was officially recognized as a third class city. As an example, Westmoreland Glass created by George and Charles West in 1889, supplied tableware, jars and candy containers and graduated to hand decorated and fine cut glass and by the 1930's were producing  milk glass and those famed Forget Me Not plates. More HERE.This was a translucent or opaque type of glass first developed in Venice, Italy in the 16th century,, often milky white, hence the name and various colors were also used. Other kinds of glass were plate, sheet and bottles. Amazingly, it is estimated that Jeanette made 70-85% of the world's glass! As they were undercut by foreign competitors, the number of factories and production steadily and sadly, declined over the years.

Many banks opened their doors, such as the First National in 1889 and the Savings and Trust Company in 1903. Business was booming.

The Liberty Manufacturing Company of 1901, arriving here in 1811 and later changing its name to Elliot Motor Company in the 1930's, designs mechanically engineered turbo-machinery with turbines, rotors and compressors utilized in many refineries, mills, and much more, combined with sealing and piping operations. Since 2000 owned by Ebara Corporation of Japan.

On the other hand, close by Elliot, the Jensen Steam Engine Manufacturing  Co. produces smaller models of turbines and engines, mostly steam.

The American Window Glass Co.originated from smaller manufacturers in the lat 1800's. One of those was said to be the Chambers and McKee facility mentioned above. John Lubbers developed the cylinder machine device for the process of making sheet glass. These methods were later adopted by much of the glass industry. With further mergers taking place, one in 1958, by 1970 American Window Glass finally became known as ASG Industries with more success to come.

Dick Hoak, former Pittsburgh Steelers running back from 69' to 70'.


A Piece of Sports History And More


An interesting point needs to be shared here as concerns sports history, which this city has it's fair share of! It is claimed, the first pro football was fielded here between Jeanette and Latrobe way back in August of 1885. The story is told that when the Johnstown team dropped out because of some previous problem with scheduling, Latrobe offered $50 to Jeanette to participate and they accepted. I haven't hears the score of the game. Anyone want to chime in here with more facts, most of us are fascinated with what is available.

Oh, there was also the Oakford Park swimming pool, a popular attraction built in 1921 and first owned by West Penn Power, one of the old trolley parks, and said to be the first at any amusement park. I've heard there was also a Zoo. The details or whereabouts are not known at this time.

On July 5, 1903, the city saw a real tragedy through a monstrously huge rainstorm of over 5 inches of water accompanying its force. The local lake, known as Lake Placid, flooded with six feet of water from the broken dam above, killing 19 people and destroying a large amount of the community on that given Sunday afternoon. Much of the park was restored and used for many years to come.

The city of Jeannette and surrounding communities is deservedly proud of its history, celebrating their 125th Anniversary in 2013.

Although the city had many ups and downs, Jeanette once held attractions like the Manos Theater, Sandson's Grocery and Olga's Bowling Alley, according to the Old Jeanette Forum, the city is losing many historic buildings in the process of, supposedly making room for newer developments and possibly housing projects. The 'Change' which we all too often see in our small towns, is not full of hope. Anyone in the region who reads the newspapers must be aware there have been legal recriminations on behalf of the abandoned Jeanette glass plant in the news from 1993 onward, complicated by various funding, chemical pollution and claims of fraud. This situation involves lawsuits of breach of contract and defamation, etc. with a major case settling out of court. A sad state for the people of Jeanette who must hold their chin up and look for answers to experience better days in the years ahead. They are well aware their past is something special to hold onto. Here's to some success in efforts to regain economic improvements and build toward a meaningful outcome for themselves.

An organization with the important purpose to "preserve the past and the present for the future" is the Jeannette Historical Society at the Jeannette Library on the corner of S. Sixth Street. They collect and document many early materials and photos for the city and outlying suburbs.


Until the next post, which will probably be about West Overton and the old distillery and village, I'll be seeing you next time and stay warm.

A Foreword On A Published Article


If there is anything I really love doing, up high on the list, is being able to inform people of our fascinating regional history. A close second is the learning experience acquired through this very research and the people and relatives you get to know along the chosen path. The School of History is an awesome place, have you taken a few courses? The Degree is your own satisfaction of gaining a meaningful understanding of times and locations which may involve some time, but totally worth the endeavor, I promise!

First, but not necessarily foremost, I want to draw your attention to an article I published for the Bullskin Township Historical Society, Volume 4-Number 1 of the Spring 2015 edition. This is a condensed version with some adjustments of my two in depth posts on the 'TFR', The Forgotten Turkey Foot Road...' and 'Turkey Foot Road Remnants...' I admit to feeling some pride in this accomplishment. In fact, I find it very exciting! Although the material was fairly easy to transfer, narrowing the scope for the most important information into a two page story was a mite more of a challenge and yet a good experience. I thank the Society for allowing me this opportunity for betterment and enlightenment of the regional community. There are GOOD, quality articles in there as well you should find entertaining and intriguing, so for more information you can check this LINK!

Although our region experienced much cold this winter with some very frozen nights, the white stuff  came in doses of one or two inches. No, we haven't graduated to weather forecasts on FWFH, rather here are a few picturesque views from the large storm from the early March of this year.

In the old days, and some of us remember a few of those extremes in weather, people had to dig there way out of their homes the best they could to get to the grocer, the post office, or just over the farm lane to the cow pens after a windy night. We don't have it as bad as all that, but getting to and from work and school can still be a harsh reality for many.

The day after the storm of March 4 was a sunny day, not too chilling and a ride around Upper Tyrone, Bullskin and East Huntingdon was certainly in the cards. So, take a little diversion and hope along with me this is the last snowfall of this caliber, and soon we will be seeing the grass turn greener and the first timid buds of spring arriving! 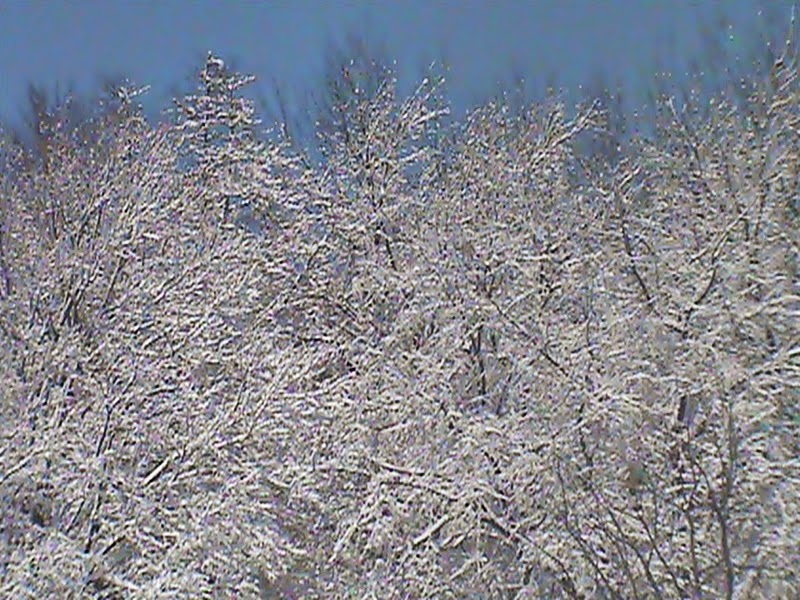 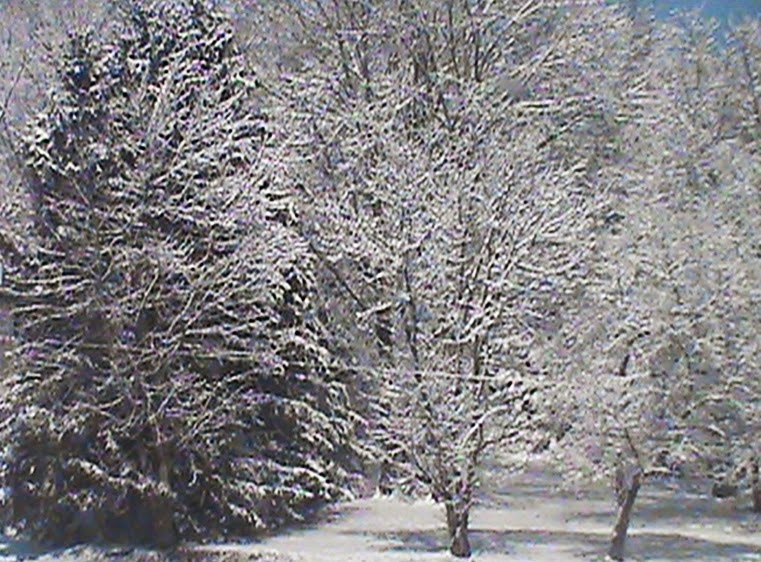 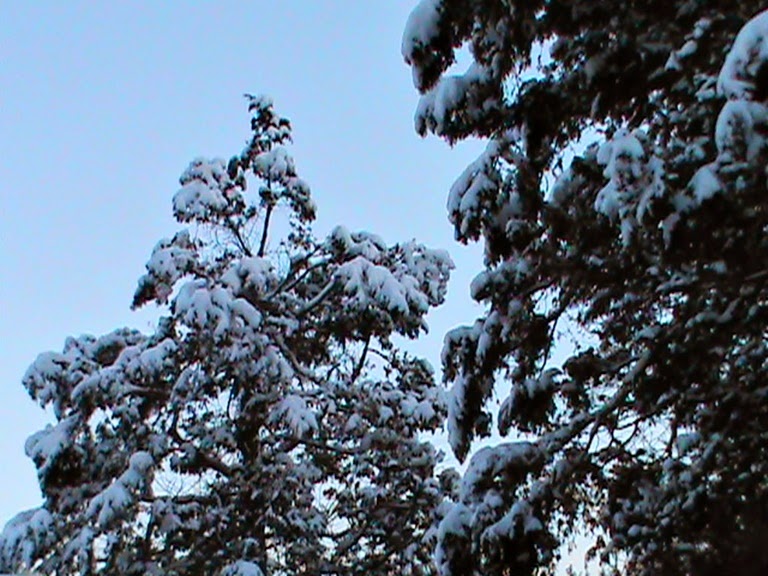 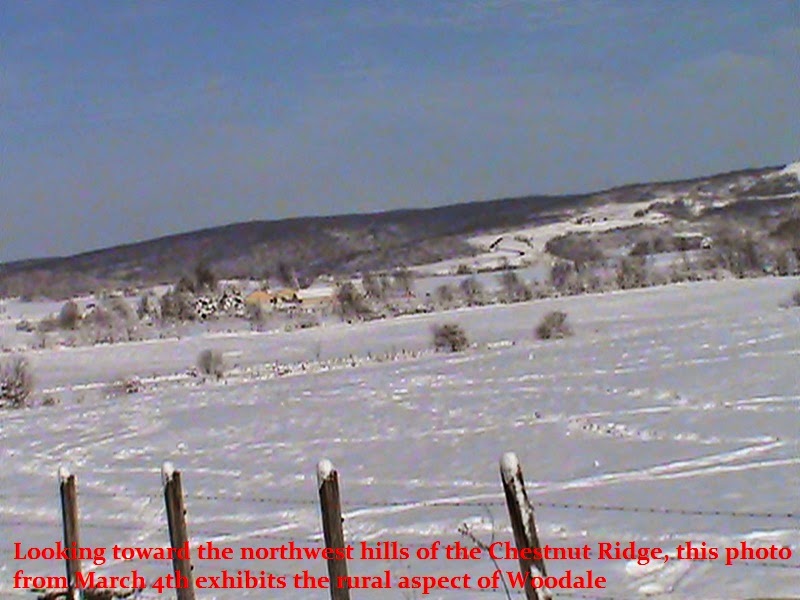 The caption from the above photo gives a description of the area where some of these were snapped. 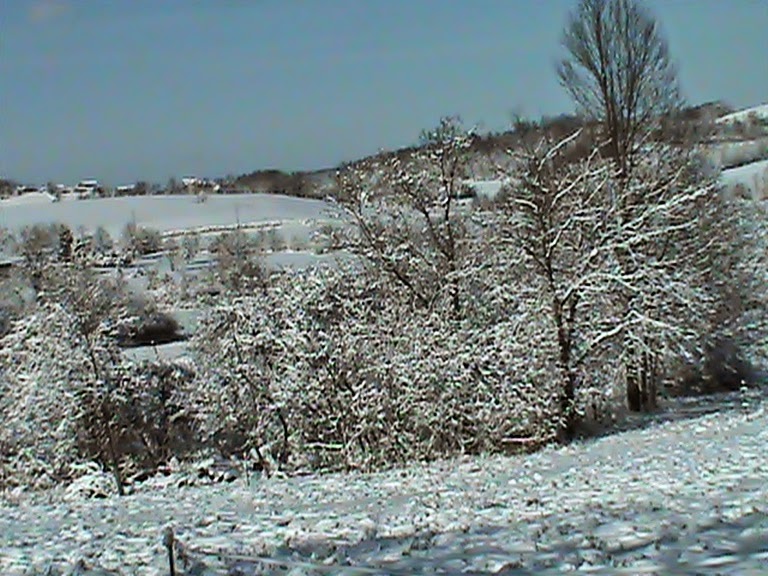 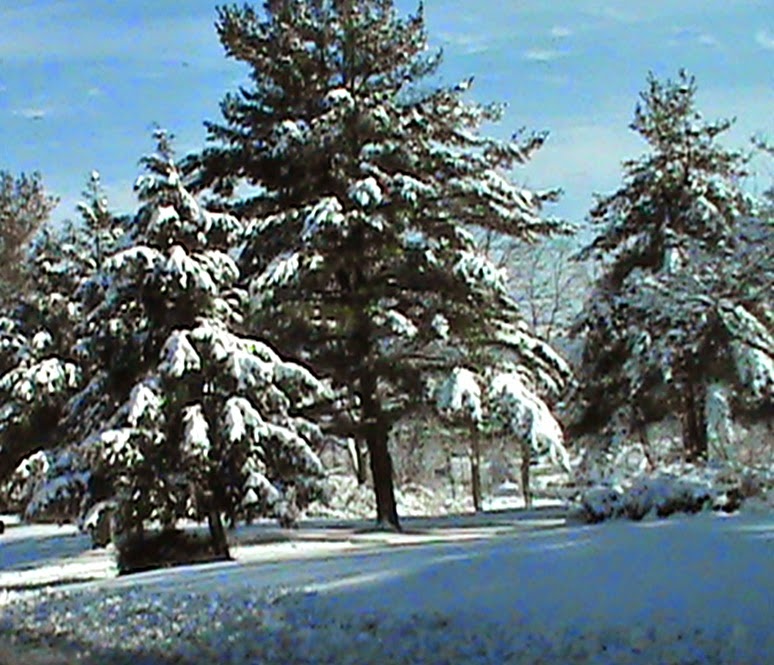 Can you guess where this is?

Above is the South Everson portion of Valley View Drive just north of the St. Joseph Cemetery. Near this stretch was an old trace that could pertain to the Braddock Road that deviated quite close to where the photo was taken. 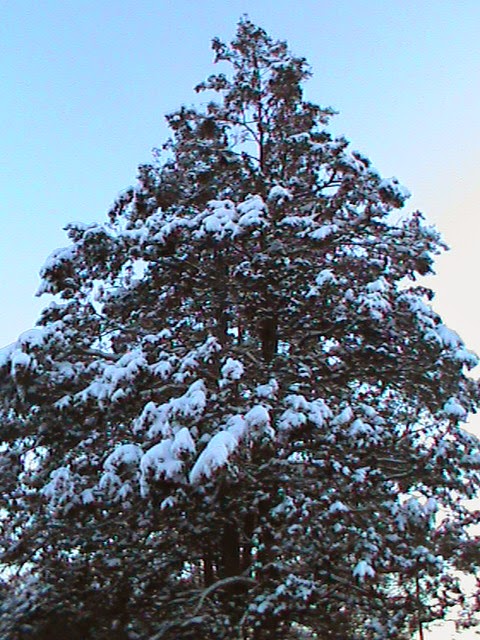 This was not actually from part of a wilderness trek, far from it, just a backyard fir tree! 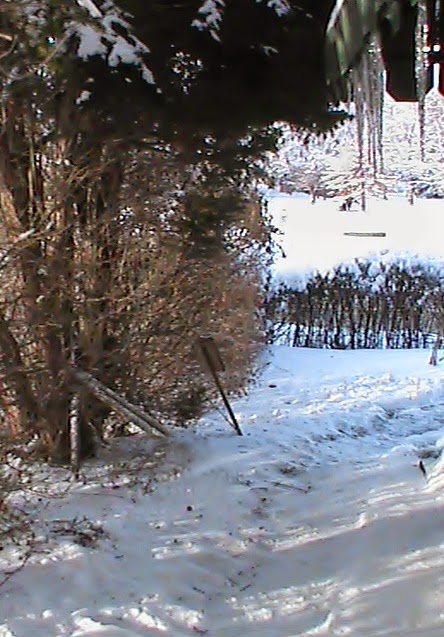 A path 'around the bend'. Sometimes our course takes us through some chilling places, though often there is beauty along the way. 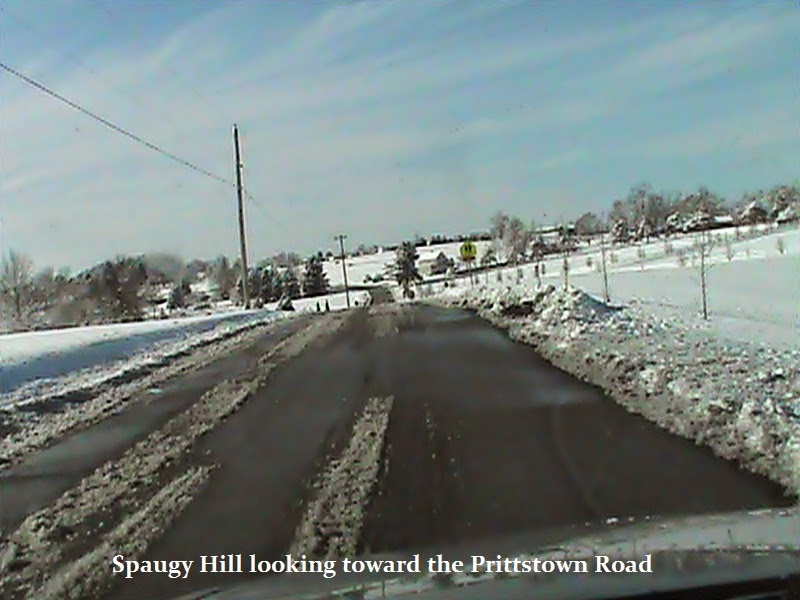 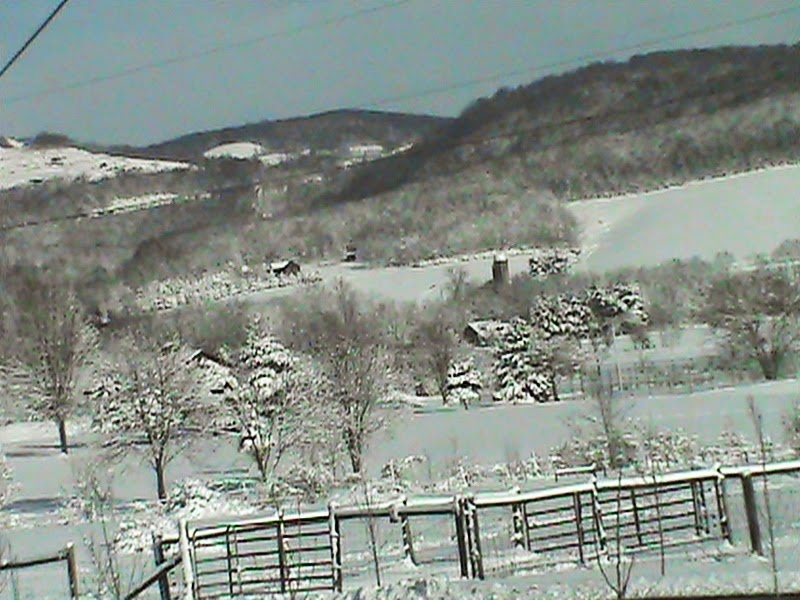 This photo is looking east toward the lessening heights of the Chestnut Ridge and the Ore Mine Hill region. In the foreground is a rural scene of Woodale. 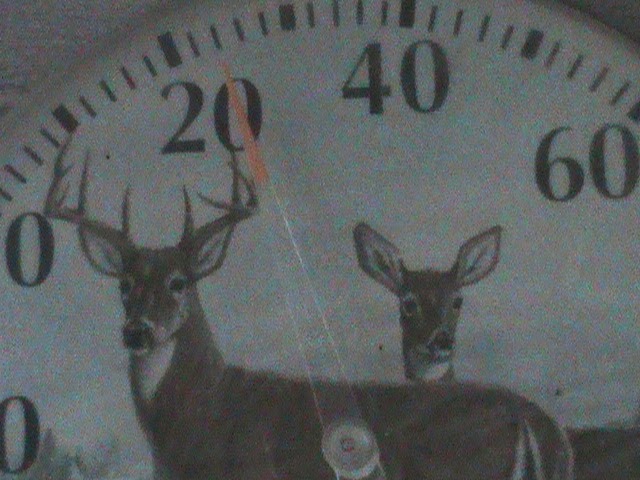 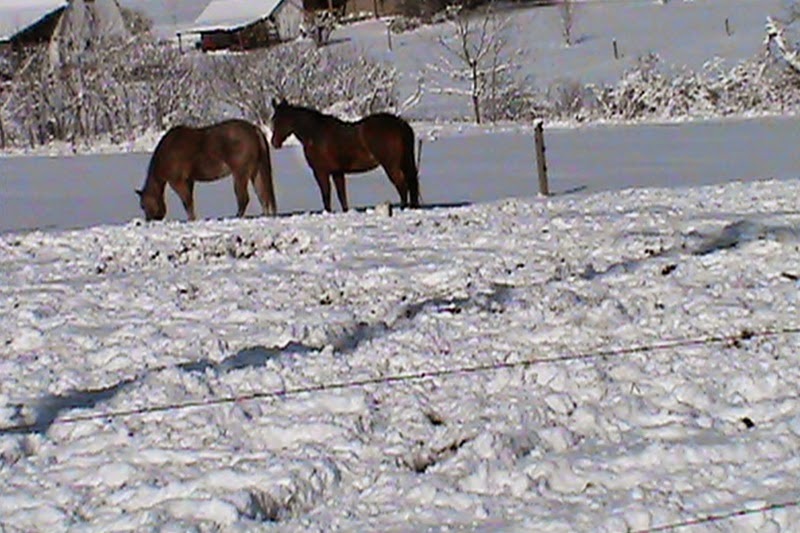 There absolutely HAD to be at least one farm scene  ; ) 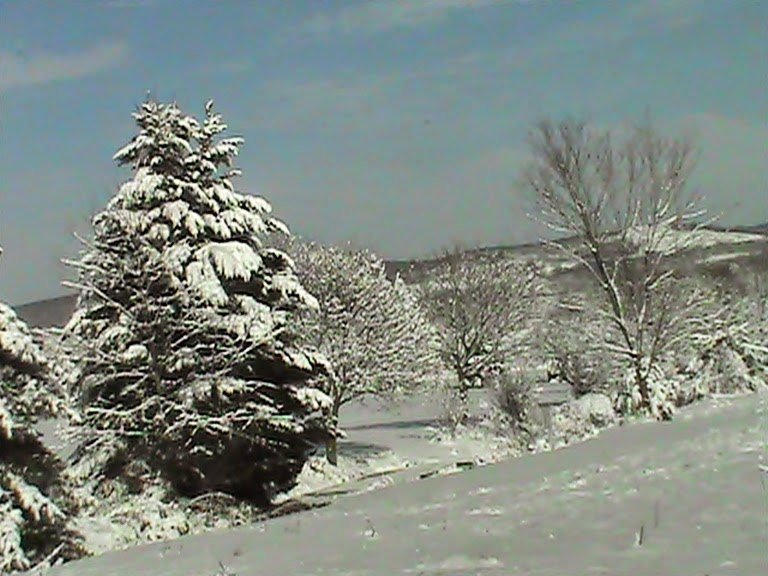 Like many of you, I sincerely wish this is our last view of ice on the gutters from the freezing winter of 2014/2015. I'm sick of the cold, to be perfectly blunt. Well, let's keep our fingers crossed. Those with snow mobiles and skis can ignore my rant against the cold. Even those hearty ones must admit SUB ZERO numbing weather is not necessary to experience fun in your travels. The snow itself is a beautiful sight, isn't it really?

Today on Monday, the temperature reached near the balmy high of 50 degrees. Ah, is that a slight whiff of more pleasant climes and the reawakening of warmth around the corner? Nudging of seedlings deep down and the song of a lone robin on the crisp wind? Just maybe...keep your fingers crossed.

I'll be back soon with a brand new entry as we thaw out. Keep Checking In!

Posted by histbuffer at 5:21 PM No comments: