Nice to be back with you good folks for another post. We've experienced quite an arctic freeze and are now, hopefully pulling out of it. Spring is NOT too far distant. Though, this subject is a fair ways from our regular insular comfort zone, the story, which naturally includes the heroic Brady family of Pennsylvania, is just too good to pass up. I expect visitors will find some enjoyment in this, as I did researching the subject.


The adventures of Samuel Brady surely should start with his birth in the old Scotch-Irish community of Shippensburg on the border of Cumberland and Franklin counties on May 5, 1756. From what I have learned from various sources, Edward Shippen's grand daughter, Peggy, was married to Benedict Arnold and was influential in encouraging him to defect to the British cause during the Revolution. This was very near to an all time low point for the British position in the colonies, a year after the defeat of General Edward Braddock's forces.

Samuel Brady was the son of Captain John Brady a great patriot of the 2nd Battalion of the Pennsylvania Regiments. He had fought bravely in the French and Indian War in Bedford County and was a part of the force organized under General Forbes and expedited by Henry Bouquet to relieve the siege of Fort Pitt in the autumn of 1764.

He had manned the stockade, or 'Brady's Fort' in Lewisburg on the western side of the Susquehanna River in the old, and then large, county of Lycoming. This was near where he was eventually killed in the line of duty near to Muncy, named after the 'Munsee' wolf tribe, in an Indian attack in 1779, but I've read conflicting accounts. His brother was General Hugh Brady with whom he moved to Washington County. Hugh Brady had served under General 'Mad' Anthony Wayne's Legion of the United States created just to the south of  Pittsburgh. He had also fought at Fallen Timbers.

Brady's Career and the Death of his Relatives

Samuel Brady had fought under Washington with his brother James with his father, John Brady, seeing early action in the Battle of Boston. he was all of 19 years old in 1775 and "behaved most gallantly", according to Lewis Wetzel in a book of sketches by Cecil B. Hartley. He also fought at the battles of New York, Long Island and the Battle of Trenton and others.

George Washington, acting Commander of the Revolutionary forces, wrote a letter, still preserved, to his commander. Col. Daniel Brodhead, commending his gallant services to the new Republic. He was promoted to Captain on August 2, 1779.

James Brady was killed near Fort Muncy defending himself alone against three Indians when he was viciously scalped and later died at Sunbury in 1778, practically in the arms of his mother. Some traditions claimed the chief who, Bald Eagle's Nest was named after in Milesburg, (of Colonel Samuel Miles), was actually responsible.

On April 11, 1779, the father, Captain John Brady was killed in an Indian ambush on the West Branch of the Susquehanna. As described by author Belle Swope, when Samuel heard of this most tragic setback, he explained, in the heat of the moment  "Aided by Him who formed yonder sun and heaven, I will avenge the murder of my father, nor while I live, will I ever be at peace with the Indians of any tribe."

So, with these close deaths of his brother, followed on it's heels by the killing of his own father, Samuel surely became a man obsessed with vengeance. Later, he was involved with the defense of Fort Pitt and Fort Mcintosh at Beaver, the county seat of Beaver County, PA. 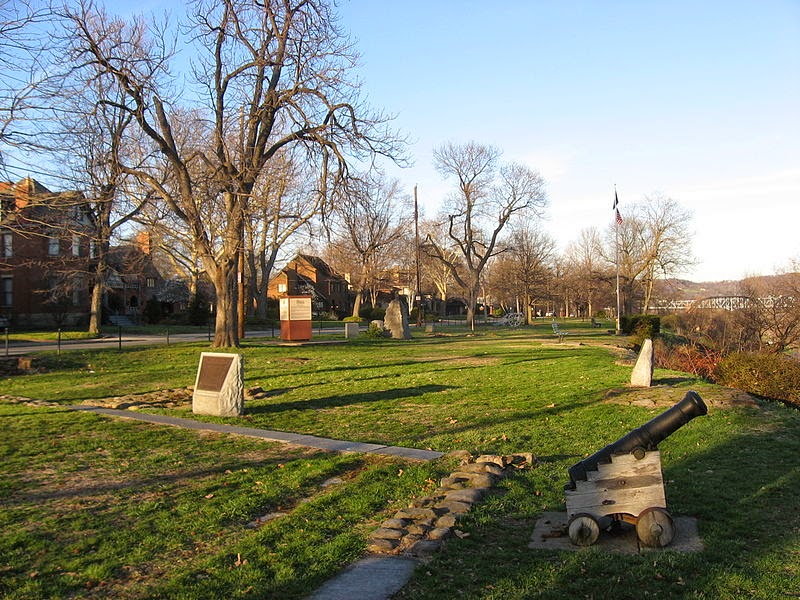 Above is the location of the important, though lesser known Treaty of Fort Mcintosh and the historic 'Old Guard' and First American Regiment of 1874, was formed on the edge of the known frontier. This exclusive military group are known to do the famous honors at the Tomb of the Unknown Soldier. By the way, so near to where my two maternal uncles are buried, at Arlington National Cemetery, Virginia after their tragic deaths in World War Two.

I don't mind saying, this brand of patriotism has a way of leaving me feeling smaller and more humble. It just brings a lump to my throat.

The story went round that while at Fort Pitt in June of 1779, when discovering the attack and killing of a family with their four children by some Seneca and Mun-see Indians, Captain Samuel Brady was the first to rush to their defense and boldly attempt a rescue. Thus, with his guide, near what is known as Brady's Bend on the Allegheny River in Armstrong County, he came upon their campfire in the night and attacked and scalped eight Indians, including cutting off the head of the Munsee Chief. This was only one of his many famed exploits.


In the area near Sandusky in the year 1780, Brady bravely spied out the Indian towns and rescued the captive Jenny Stupes at that time.

While it might seem you are hearing tall tales here, it is said that Brady's Leap occurred about 1780 on the Cuyahoga River near Kent, Ohio. 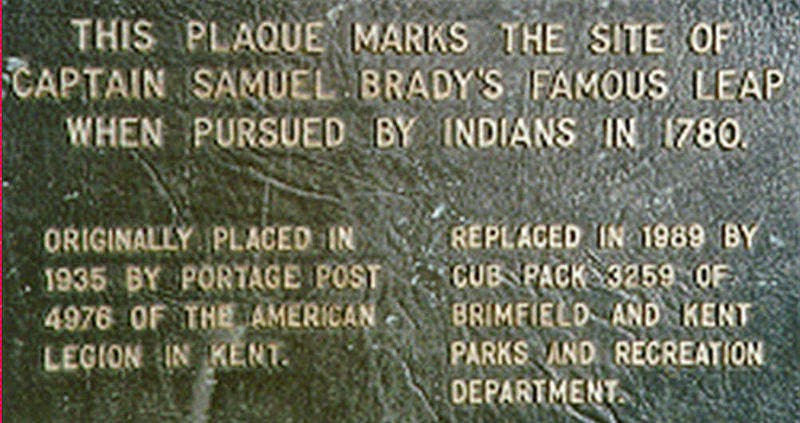 After a failed ambush a larger band of armed Indians ended up chasing him after killing most of his party and he somehow escaping their clutches after being captured while nude and defenseless, was successful in getting away. Here, in the only available avenue of avoiding capture, he surely avoided a horrific torture and grisly death jumping, unceremoniously, over a whopping twenty two foot gorge. He accomplished this impressive feat and hid himself in what is known as Brady Lake which up until recently, held it's "Captain Brady Days" festival.

There is a story, again told by Belle Swope, that in 1782 Brady and the wild Indian fighter of West Virginia, Lewis Wetzel, were chosen by Daniel Brodhead, the commander of Fort Pitt, to infiltrate the Shawnee Indians Ohio, which they promptly did. They impersonated members of that tribe to the point of brazenly disguising themselves as such and joining in a Grand Council and while spying for the American forces, learned many strategic secrets. When suspicions arose they began a daring shootout and successfully escaped capture, though nearly freezing in a dangerous crossing of the Ohio River. On the return, Brady and Wetzel were was said to of been highly commended, which certainly would of been well deserved!

Samuel's mother, Mary Quigley Brady, died after much hardship and illness in 1783. She was able to see the defeat of the hostile tribes and the winning of our Independence from the British.

According to legend, this was the same Chief who killed his brother James. However, according to 'The History of Lycoming County' of 1892, Bald Eagle should already of been deceased by this time, so that is very unlikely.

In 1783, Samuel Brady married Drusilla VanSwearingen after an elopement at Weirton, south of Wheeling.

Controversy did not escape him though. He and possibly some of his Virginia Rangers, were held at Pittsburgh on charges of killing Delaware Indians after the American victory of Independence. Apparently, Brady freely admitted to this, but was still acquitted.

Samuel Brady ended his career as avidly as it began fighting in the Northwest Territory in the early 1790's against Blue Jacket and Little Turtle.


And Now, A Formal Request:

This is where I want to invite all veterans, or if you happen to be a child or grandchild of a war veteran who had seen action, to send in any story, newspaper article or anecdotes, with any accompanying photos of heroics in the heat of battle that I can add to a future post on this special subject. It is in the planning stages only, more of an idea I have been fiddling with, and would include some experiences of what I am aware of from my surrounding family to get the ball rolling.

This is designed, only to keep these eras of patriotism from being forgotten, so please, don't be shy people. Although, it would be difficult to ascertain every submission will be published with a guarantee, whether this gets the proper treatment, mostly will depend on you good folks. One should be justly proud of the exploits of a father, brother, mother, uncles, and grand fathers that supported the war efforts.  I will greatly appreciate whatever responses you can muster in this call to action!
Posted by histbuffer at 6:48 PM