INTRO  and A Newspaper Article


This is a further travelogue of Jeff Hann's fieldwork of the Turkey Foot Road in Bullskin township of Fayette County, PA. This would be a strong candidate for an antecedent route, an earlier road that was a part of the modern Hawk Road and the region to the south of the area covered in detail in the preceding post.

First up, I need to relate the fact that there is going to be a milestone newspaper    article about Lannie Dietle's book coming out THIS WEEK on this very subject! Jeff Hann, Kim Brown of the Bullskin Historical Society, and I were also interviewed by A. J. Panian, the editor of the Mount Pleasant Journal for our perspective on the Turkey Foot Road and the aspect of our involvement and relationship to each other. In part, this concerns how we initially met and got together and became colleagues. While the bulk of the article is Lannie's explanation of the origin of the 'TFR' itself here in this branch of fascinating research. Mr. Panian was very intuitive and perceptive to this whole situation.

My position was a little more peripheral in that I was invited to participate and so get involved in walking the routes. In this relationship, I offered to write a post on this material to further the interest in what is a very fresh discovery of historical significance. So, you really should check the newspaper for yourselves. The article can be accessed online on Wednesday the 17th of December at 9:00 p. m. The Newspaper will hit the stands on Thursday the 18th. Here is the online website, http://triblive.com/news/. Click on 'Neighborhoods' and then pick out 'Mt. Pleasant' and click the icon. There you will find the article.

Here is some of Mr. Hann's photos and descriptions of what he has discovered further to the south of the alternate, or short cut route he discovered to the north that began at latitude 40.052507°, longitude - 79.501598°. That segment of the blog post which also connects to the route below the Spruce Hollow and Breakneck intersection thus maintains a course near Breakneck and bends to the north. As mentioned above, that segment of the TFR is already documented elsewhere, specifically on the last post.

This is a graphic depiction of the route Jeff walked, approximately a half mile, near Hawk Road.


1. Here is where Mr. Hann first encountered an apparent route of the Turkey Foot Road from Hawk Road:

This is southeast toward Hawk Road. Coordinates are 40.049866, -79.499577. Anyone can check with modern maps to observe this route closer with the interaction of the modern road. Satellite imagery can help give confirmation as well.  Jeff states that one of these may be a logging road, but the other surely should be a connection to the TFR.

Here is how Jeff describes the following photos:


"I walked the road between Quail Hill Rd. and Hawk Rd. this evening and I don't think there is any doubt that it is the Turkey Foot Road. Although I didn't get to walk the whole thing I did walk it to to the just a little beyond the 'Y'. I did do a path track but my phone went dead before I saved it and I lost the path but I still managed some pics and some coordinates. So these two pics are of the more western part of the 'y' just as it breaks over the ridge and before it runs into the high wall of the stone quarry. The first pic is looking east toward Hawk Road and the other pic is looking west toward Lilley hollow. You can clearly see the typical deep rut probably about 4 to 5 feet deep". 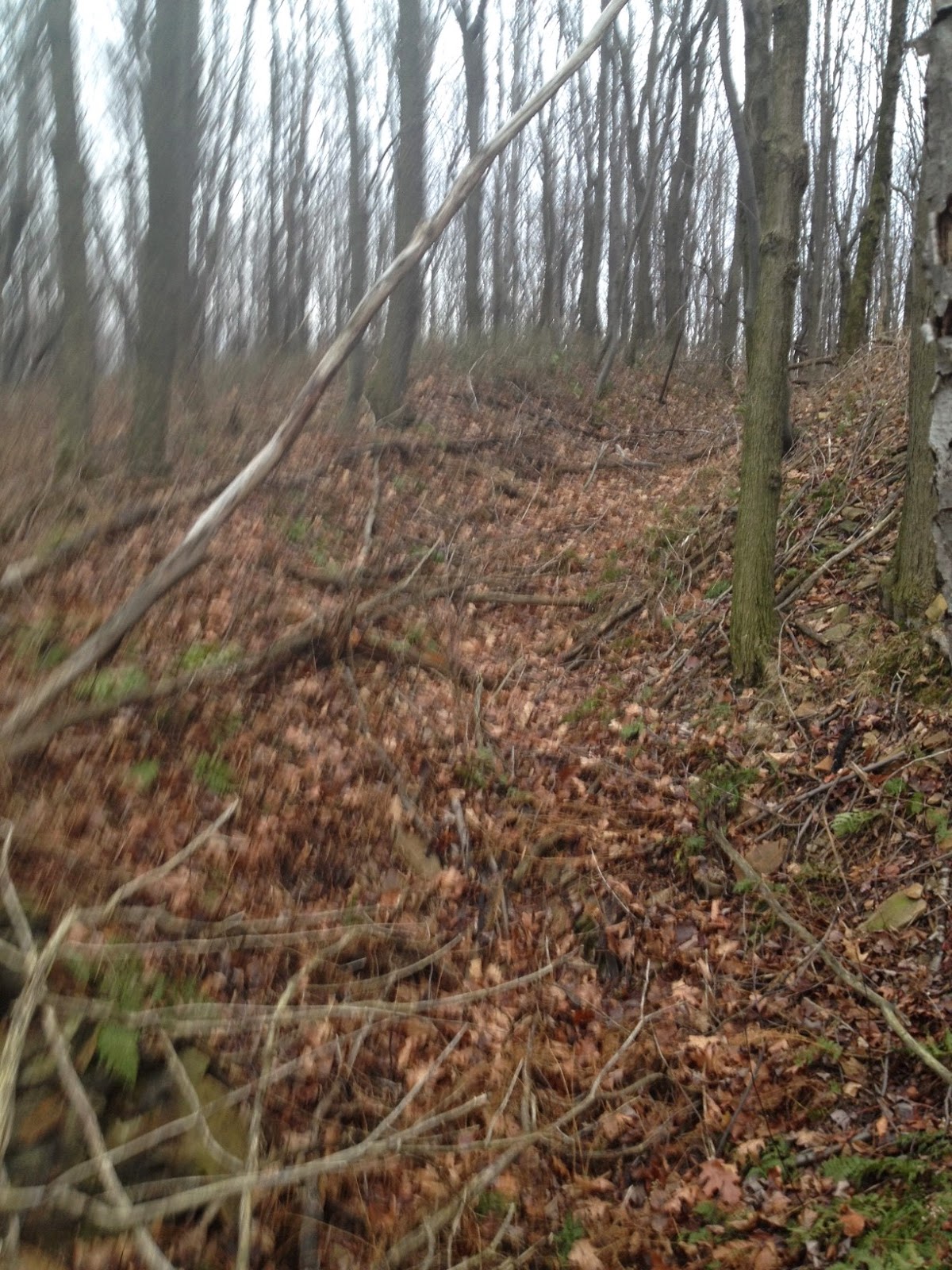 6.  This photo below is at the 'Y' in the road "starting at the left side of the pic is looking east toward Hawk Rd. and to the right is looking west toward Lilley hollow."

As Lannie Dietle observes, the Turkey Foot Road crossed through what was the 1796 Vought property and as an early form of the Quail Hill Road route across the old 1794 Peter Smith and James Smith property surveys. I certainly agree that some of the gradual descent of 'riding the ridges' witnessed on these routes would lend credence that they were clearly used by wagons. Of course, this entails the arrival of settlers and the further activity of farmers, drovers, mail and coaches for travelers and business in the region's early days. What a great, but fleeting glimpse through a window to the past we have here. There is the distinct possibility some of the Turkey Foot routes in Bullskin were originally related to various Indian paths and were very likely original pack horse routes, changing over time with weather conditions and heavy usage and convenience of access.

I find myself thrilled by these discoveries. Nothing less would explain my reactions. Surely, I echo the sentiments of my colleagues I have recently so frequently collaborated with, when I state the importance of the additional insight we gain from having more evidence of these old routes of the Turkey Foot Road.

Jeff Hann is a man determined to add to the known route of the Turkey Foot Road. With his efforts and in sharing these photos and descriptions along with the GPS coordinates, he has succeeded. Subsequently, everyone can convert these online and check the areas for themselves and be a part of this too.

Jeff Hann has pointed out that he is not totally decided on the interpretation of the evidence from the three way 'split' that shows up on the 1816-1821 Melish-Whiteside Map.  He specifically wants to check further into the stone quarry area and gather more information on the exact relation to each other of these split routes.

Jeff states that "because the southern most part of the split up there turns pretty hard toward the south and I found another old road just recently...that comes out onto Breakneck Rd. at the old Breakneck furnace. What I'm saying is I think there were three roads coming down the chestnut ridge...". He clarifies this in relating the routes near Mick Lilley's, Lilley's Hollow area and one coming down the ridge at Rich Hill. He feels this route has much the same appearance as the road I walked with him for the first Bullskin post on his discovery north of Quail Hill, thus, the Rich HIll route is a good candidate for a continuation of that route. So saying, you can grasp that more investigation will likely take place. I report here that any extenuating research he can add to this, already fairly considerable body of material, will be promptly included here as an update. If this does not seem to suffice, then it will be documented in a future post.

In summing up, regional history of all layers and types are what the blog is all about. Fresh research, which has been so prominent in the recent months, is a more urgent and pressing matter for us to study. Here the chance has nicely presented itself for our interest, and, yes, for our entertainment. More information was needed and has been provided here. I hope visitors have been half as caught up in the uncovering of this ongoing eye opening material, as I have been. Then, my part of the job is accomplished and well worth the time.

Historical research owes a palpable debt of gratitude to Jeff Hann for his recent findings and evaluation of these intriguing routes in Bullskin Township. As does the extra input from Lannie Dietle, stemming from his five year quest and absorption of voluminous contributions in this field.  Do you not agree with my assessment? Actually, it is spot on! *