I hope everyone had a good, patriotic July Fourth!

On the weekend of June 28 and the 29th, Connellsville held its re-enactment of General Braddock's Crossing festivities of the Yough River here, near Crawford's Cabin. I was glad to be a small part of that.

It's doubly interesting, as I have had a post in the works for some time for the city of Connellsville anyway and that's convenient. This was a good opportunity and a meaningful experience all around, one I hadn't had before. The rock and roll music of the Del Sols was nice, they could actually play! Whiling away some time, many of the families tended to gather at booths, displays and the Balsley Pavilion, built in 2011, to beat the heat a little and enjoy some fun. This is as about as soon as this article could be done, since we are so close on the heels of July Fourth celebrations. I would like to add that The Greater Connellsville Chamber will sponsor the main fireworks there.

In brief, during the Seven Years War of Europe, some of which played out here in what became our own unique backyard, so was being 'invaded' by the French, generous to the natives, but with long supply lines from Canada, while attempting control of the waterways and fur trade, goaded by the old claims of explorers LaSalle and Celeron.  While Pennsylvania was naturally inhabited more toward the east by the British, (and Germans, Dutch and Swiss), of the 13 royal colonies of the King of England since the 1600's, by grant of 'Penn's Woods', they were pushing westward for the prospect of more less expensive land. Once, southwestern PA was originally inhabited by the Monongehela and Woodland Cultures, and later, Algonquin, Susquehannock or Conestoga, and then some of the Iroquois from the more northern regions. And though the Seneca were the most powerful on the western corridor, first in rank were the Mohawk and the Onondagas; the Leni Lenape, and sub clans, which held the Munsees; and the Kanhawhas. As well, the nearby areas were visited on the periphery at times by other tribes and sub tribes passing through, such were the Shawnee, Wyandot and Nanticokes, with mixed clans of varying allegiences and agendas, such as the Mingos. As things stood, the provincial situation here in the Ohio Valley west of the Alleghenies was becoming a crucial hotbed and violence and bloodshed was honing in on the surrounding pioneers.

Now that we have laid some groundwork for the urgency of the route taken and this crossing of the Youghiogheny River, I will leave off to relate the recent adventure of a tamer nature to this very place. (some research gained from 'The Indian Wars of Pennsylvania', C. Hale Sipe). 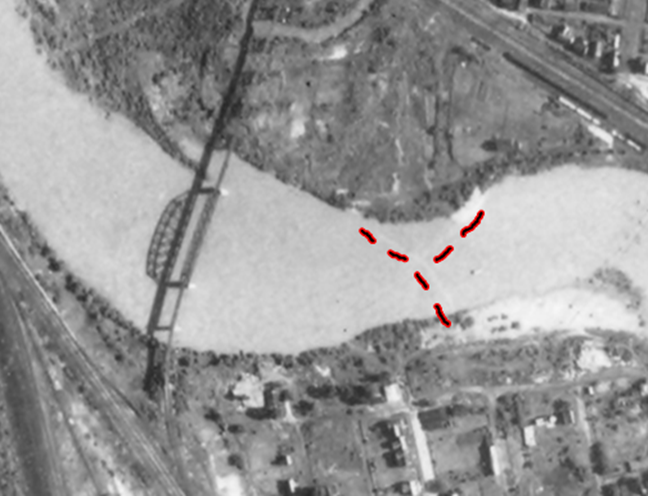 So, down I went by Route 119, heading to the car park and turning right after a very mild crossing of my own on the Memorial Bridge on the west side of the city. Having  camera in hand, and some beef jerky, with the temperatures hovering in the mid 80's, and in need of a cold drink, I had my eye out for a parking spot. The forecast predicted foreboding thunderstorms and I wondered what treatment that weather would receive by the powers that be, centered around something to do with splashing through a river of water with lightening all around!

At the Yough River Park area, they had a nice Art on the Yough show, which I didn't really have time to take in. About 12 p.m. the Historical Society began speaking, (and speaking...), and thus began the ceremonials preliminary to the actual crossing itself at 1 o'clock. 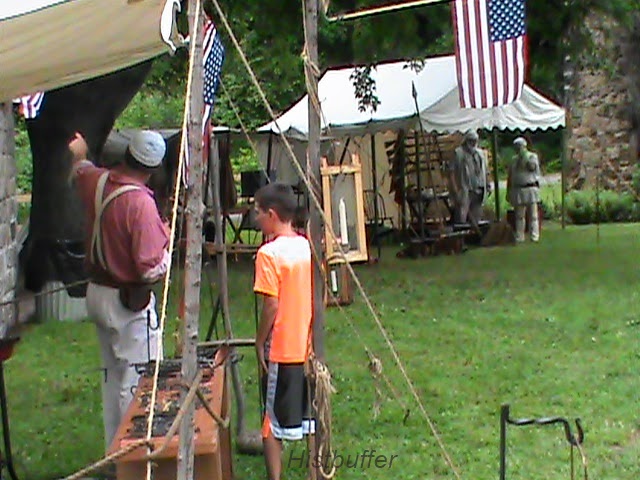 A very exciting take on the colorful fording here, I might add! It gets the kids out of the history book mode, away from the video games and bringing to life a pretty fair impression of the reality behind the festival. It may of been marred ever so slightly by so many of the 'rent-a-cops', (no disrespect), and the presence of numerous firemen in the river. 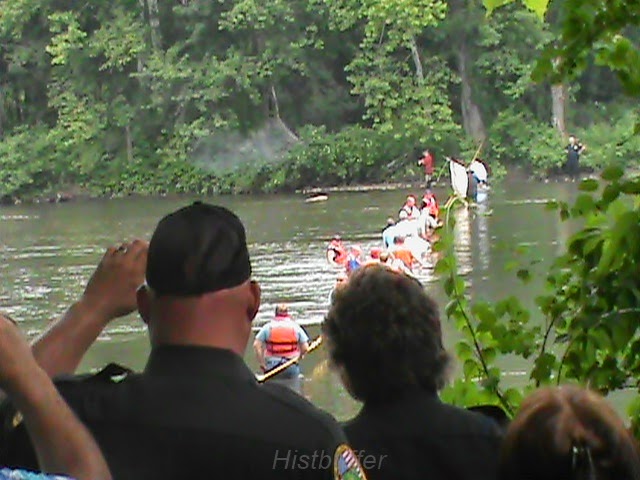 Add to that, the very long bright yellow rope the whole way across, well it does lose something in the translation. I looked longingly, but failed to find Mr. Braddock or his horse. 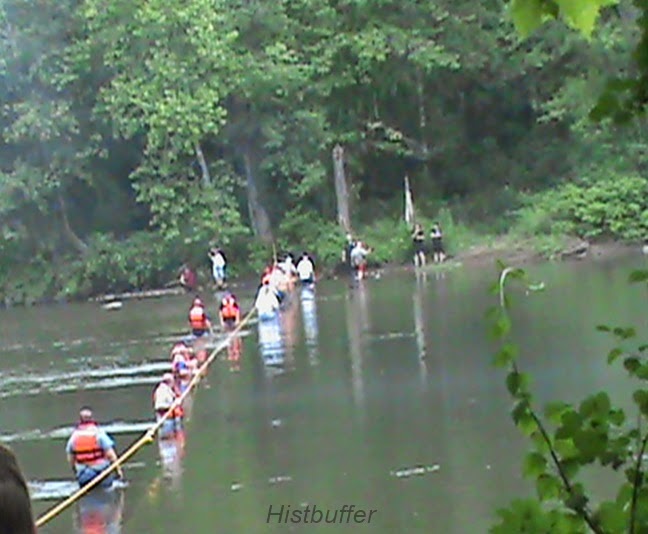 Here you can also see the rafters interfering a bit on their journey down river.

But, with the shouting, band playing, splashing and shooting, hot damn, this felt right up my alley. All in all, it was enjoyable, especially the puzzling continual shooting of the muskets by the interestingly attired colonial re-enactors. 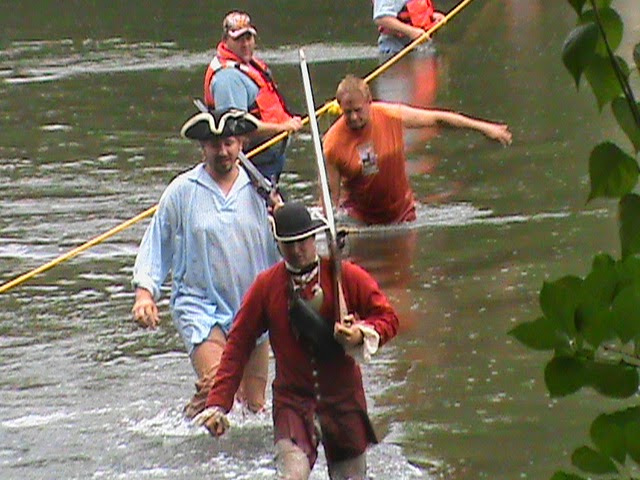 I'm not sure who was who exactly, but you would suppose this might of been a needed consideration for extra drama; and it does get your attention. 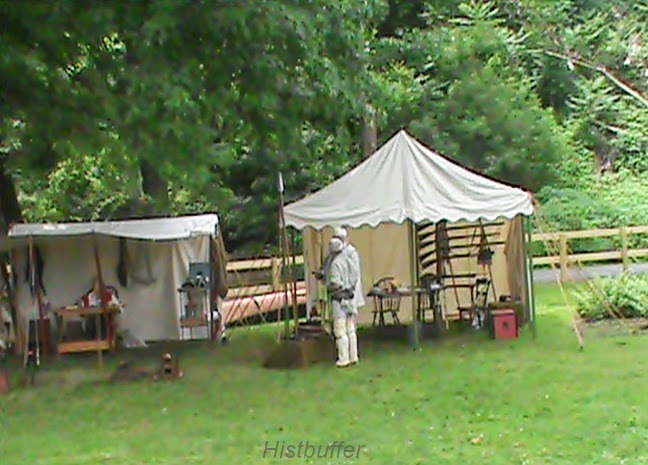 The recreation of Col. Crawford's 1766 cabin:

For the nitty-gritty, historically speaking, linking up to the Greater Allegheny Passage, locally, you can follow the Heritage Trail signs on the west side around a two mile area and ride or walk to take in the sights. The British themselves, were busy following the Nemacolin Indian path and part of the Catawba Trail; the exciting tale of the breaking and forging of Braddock's Road up a mostly, northwesterly route, through Fayette and Westmoreland during the heat of the French and Indian War, in 1755. This truly historic route would become the National Pike, then the future Route 40 and U. S. 68.

He was responsible for launching the Expedition to defeat the French and Indians, (including Seneca, Mingo, Shawnee and some Delaware tribes), and with 21 year old George Washington, recently of Fort Necessity who had scouted the region well for Virginia previously with Christopher Gist, now as aide de camp and a Major, and, at least, part of the way, a young wagoner named Daniel Boone, Colonel Thomas Gage, Captain Horatio Gates, future commander of the continental forces and Indian guides, on the long march to the forks of the Ohio, with roughly, 2,600 troops, baggage, wagons and artillery, was assigned to the colonies for the taking of Fort Duquesne. Widening the road as they moved along, Colonel Dunbar was assigned the control of the artillery and some of the heavier supplies on Chestnut Ridge.

This led to the fateful encounter in July and surprising ambush at the three hour Battle of the Monongehela, with approaching 900 casualties, the Major General severely and mortally wounded and the hasty, disorganized retreat; Braddock's burial by Colonel George Washington, and quick journey back to Will's Creek, Maryland. Much else can be said of the cutting of the wider road, the unfortunate tactics at the Field of his name, Dunbar's over reaction to the oncoming danger posed by the French, etc. We are here to concentrate our attention to the after affects of the following of Stewart's earlier Crossing here near Colonel Crawford's historic cabin in what was said to be three feet of water at the Yough Park, an area full of historical significance, at the 2014 June Festival at Connellsville, Fayette County, separated in time, hundreds of years later. 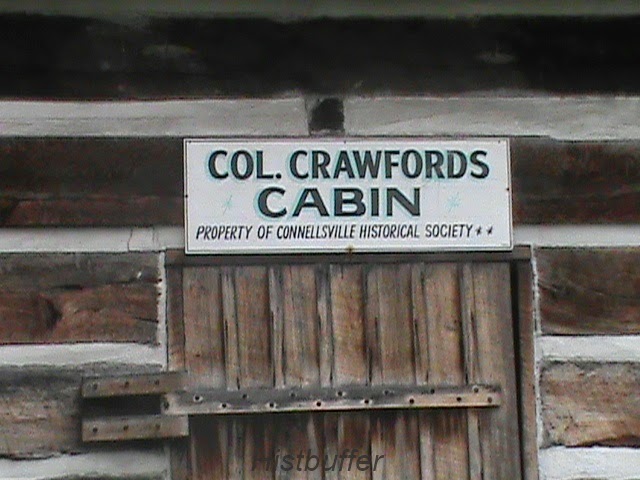 The route was also used as part of the Underground Railroad, to help escaping slaves in the 1800's and today is a good place with swimming, biking, hiking and fishing.

Coming from the area of Mt. Braddock on Laurel Ridge, past Gist's Plantation, and Robinson's Falls at New Haven where the army camped and before the next camp at the Narrows, a mile towards the north, you come to Stewart's Crossing on the Youghiogheny River. More information here. Information on Mt. Braddock and Gist here. 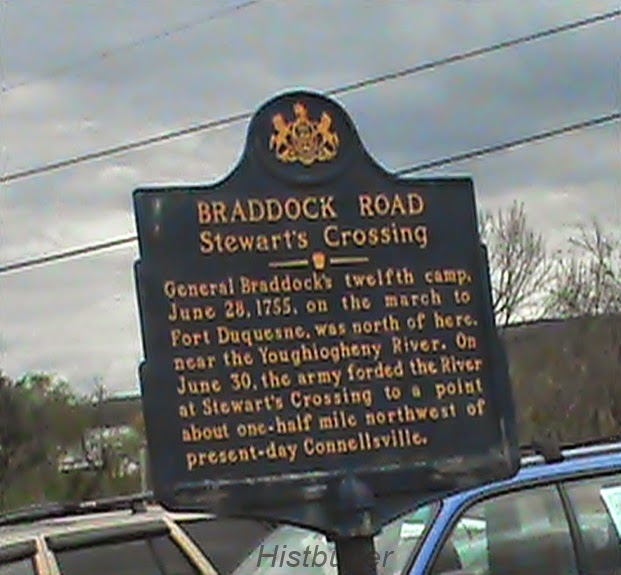 William Stewart was an early settler on the western side of the Yough River, near Opossum Run and Mount's Creek in what became Connellsville in 1753.

A tragedy of a different sort involve a Scots-Irishman, Colonel William Crawford, 1732-1782, an early surveyor and soldier with connections to Washington and his Virginia Regiment. Tortured by the Indians and tragically burned at the stake in Sandusky, Ohio. He also fought in the Revolutionary War.


This is done in honor of the work of a man and an army of what were then British soldiers in colonial days of yore. Washington had said of him later, in retrospect, "Thus died a man, whose good and bad qualities were intimately blended. He was brave even to a fault and in regular Service would have done honor to his profession. His attachments were warm, his enmities were strong, and having no disguise about him, both appeared in full force." 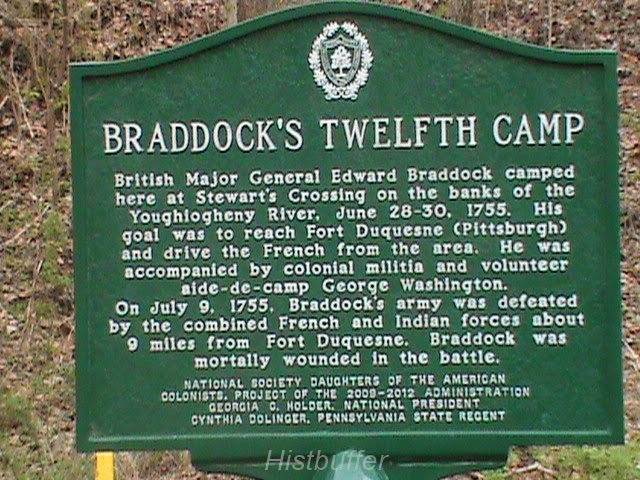 It was a great learning experience for the young and old. We are seriously indebted to the Connellsville borough, Historical Society and the Fayette County Cultural Trust for holding the meaningful and cultural event there, as well as all the other sponsors.

Any of you that were here this weekend, please go ahead, be proud and leave a comment with a little of what you thought of the event and what all you did.

Here's some more of the action:


The Connellsville post will be up sometime soon, just don't get impatient. And in the mean time, I do have a few other plans in the pipeline. So, stay tuned and check back!
- Histbuffer
Posted by histbuffer at 10:54 AM