Major General Arthur St. Clair, (thought to be 'Sinclair' by some), lived an interesting life of varied fortunes, which ended in a rather sad state of affairs,"in poverty and neglect." He is historically closely connected with Westmoreland County, PA. This is his illustrious story.

Born on April 3, 1736 in Thurso Castle in Caithness, Scotland, of Norman birth, from a family of aristocrats and knights. He studied medicine at the University of Edinburgh, then moving to London Under the ministry of William Pitt, he enlisted as an ensign May 13, 1757 and he sailed for the United States under the control of Admiral Edward Boscowen. He was placed in the division of the army directly under General James Wolfe and was involved in fighting in the taking of Quebec from the French forces. Designed by the Duke of Cumberland, he was in the popular Sixtieth Royal American Regiment, the same as other greats to be, as Colonel Monkton, Colonel Henry Bouquet and General Murray. It was convenient that General Gage was his cousin, and he was sent to him in Boston.

After a marriage to a rich maiden, Phoebe Bayard in 1760, and becoming acquainted with the powerful Penn's, the Proprietors of Pennsylvania, he moved to Bedford. here he was given command from 1767-1769. There he was involved in the opening of the Land Office, together with his brother-in-law, Captain Bayard, a good position for a young, aspiring figure to be associated with. With the creation of Bedford County from old Cumberland, he was appointed Justice of the Peace. There he began working on the erection of Westmoreland County in the year of our Lord, 1773. There he continued his rise to prominence being appointed Justice, prothonotary and clerk of the courts, to boot.

In 1774, when the Virginians, under Lord Dunmore claimed much of the southwest of the state, he took up arms to repel them from the area. In 1776, he was then commissioned a Colonel in the third Pennsylvania Regiment which saw action in at least five major battles of the Revolutionary War era. He became a brigadier General in August of that year and helped mobilize the New Jersey militia. He was present during Washington's famed Crossing of the Delaware on the day after Christmas, 1776. This was a difficult mission performed against the Hessian forces occupying Trenton, New Jersey. This took place three times altogether, with successful campaigns associated with each crossing. He was promoted to major general in February 1777. Though court-martialed for his retreat at Ticonderoga, he was later exonerated and he had brought his forces south to Yorktown, Virginia when Cornwallis surrendered the British forces.

In 1782 when returning home on furlough, he found most of his estate in ruins.

St. Clair was thence elected to the Pennsylvania Council of censors in 1783 and rose from the Confederation Congress to President of the Continental Congress in 1787. Under his watchful guidance, the powerful Northwest Ordinance was enacted into law, and signed by Washington. After this he was made governor of the Ohio territory, which included parts of western Pa. He had reached what was, perhaps the pinnacle of his career. 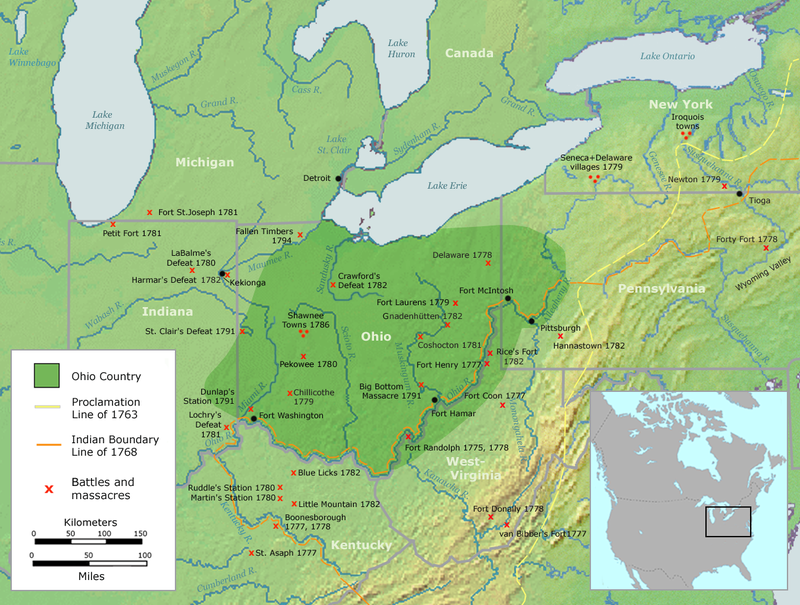 He was instrumental in gaining agreement for the signing of the Treaty of Fort Harmar with mixed results. In 1791 he was commander and major general of the United States Army becoming embroiled with Chief Little Turtle of the Miami's and Shawnee chief Blue Jacket leading to what was known as 'St. Clair's Defeat', in which Washington was upset, and perhaps rightly so, decided to call for St. Clair's resignation. Indeed, the low point of the major general. The disaster was heavily investigated by the House of Representatives, and it was found that other parties, including Knox and Hodgson, were guilty as well and he was partially exonerated. he was ignominiously removed from the governorship by Thomas Jefferson in 1802.

There is an award presented annually to those organizations that make a significant contribution toward historical preservation in the region. It is the Arthur St. Clair Preservation Award, sponsored by the Westmoreland County Historical Society at 362 Sand Hill Rd.-Suite 1, Greensburg, PA. 15603. E-mail address is @westmorelandhistory.org Maybe some day, you never know! It's a bit of a shame that the most recent award form is for 2012.  They keep a Library, do school tours, with much in the way of genealogical materials, and helpful information involving Hanna's Town.


Many of St.Clair's memorabilia, relics and part of his old home, between Ligonier and Greensburg, The Hermitage, and are now at the Fort Ligonier Museum on display. He depleted his wealth and resources over the years by his gifts and the refusal of Congress to reimburse him for his generous loans.

The General and the man, died in poverty near Youngstown, August 31, 1818(1818-08-31) at the age of 81 and is buried in St. Clair Park in Greensburg. A  true patriot of southwestern Pennsylvania and a valued colleague and confidant of General and President, George Washington. In 1890 times and feelings had changed and Congress declared, “Perhaps there was not a prominent character of the revolutionary period, with the exception of Morris, who gave so much of his life, his service, and means to America as did St. Clair, and there was none, with that exception, so poorly recompensed.”

(much of the material herein is derived from the 'History of Fayette County, by John Newton Boucher, Lewis Publishing Co. 1906.

St. Clair, Arthur. United States. House of Representatives. A Narrative of the Manner in Which the Campaign against the Indians, in the Year One-Thousand-Seven Hundred and Ninety-one, was Conducted, Under the Command of Major General St. Clair. Philadelphia: Jane Aitken, pg. 181.