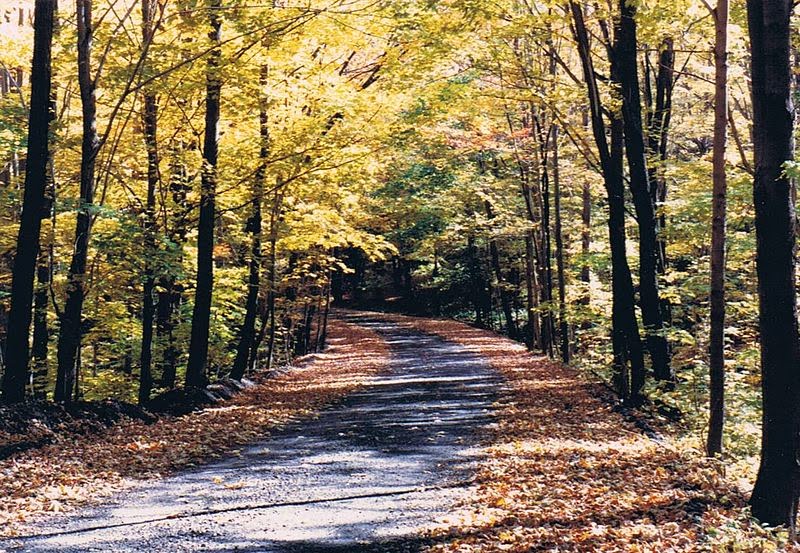 Hi folks. I've got to say, I'm crazy about the Laurel Highland region of western Pennsylvania, and rightly so. Having said that, the truth is, we're a little off the beaten path for blog posts here. Read on and you'll get a sharper insight as why it's included.

First up is a quick issue I need to get out of the way. This could of fit well with 'Relatives And Ancestors', though with the graphic intensity already on that post and soon to be more, it made more sense to create a separate posting altogether and forget about it. That was nicely resolved by this trip east.

Back a week or so ago, we sauntered up past Laurelville and Acme with Salt Lick on our right, taking the asphalt through the trailer trucks into Donegal township crossing the Indian Creek Valley Trail and Jone's Mill over the Laurel Ridge toward Jefferson Township and a piece of western Somerset County. We eventually basked a bit in Bedford County, too. Fill up the tank, for sure! A word about the Indian Creel Valley Railroad might be in order:

Began in 1906 for hauling timber, the railway was soon completed through Mill Run, Melcroft, Indian Head and Champion and the freight cars were bustling back and forth carrying coal from the mines. The operation was connected to the Blair Brothers in Kregar. By the 1920's it was bought out by the B&O. Saltlick Township and the Mountain Watershed Association created seven miles of trail for recreation through the southeast of Westmoreland and northeast Fayette, with ownership in Saltlick, another mile and a half has been added in Donegal.

Now, I would like to of had time to get down to Forge Road between Meyersdale and Summit Mills, but that was not to be. This wasn't one of those well planned and thought out excursions, more a spur of the moment decision that tomorrow might be an open day, so we jumped in the car and headed off. Now, next time maybe I can prepare more thoroughly and check out Rockwood on the Cassleman River, traditionally one of the places my great grandfather called home. Well, the main reason was we determined to personally show respects to our maternal great grandfather, Israel Hoover, who by oral tradition, was quite a brave soldier in the Civil War. This was the first I had found out the location. I hadn't thought as far as a separate blog post. Regardless of preparations, this was high time to see it through.


The June weather threatened storms, but the further I approached the land of many of our ancestors, the more the clouds parted, and by early afternoon the sun shined down as a kind and propitious  welcome on our vehicle. Going past the road to Hidden Valley Resort in Jefferson Township, and Kooser State Park on trusty Rt. 31, down past the Laurel Mountain Inn and then driving on south further along the way. There is little of the white pine and hemlock that use to be so abundant, but there are many old coal and strip mines scattered around. I just don't get to this area often enough. When we were kids, my mom and grandmother use to take us to see some of their closer relatives who were still alive. I won't bore you too much with that here. We always went on in to Somerset to shop at places like Newberry's and finally, get lunch and back home toward evening. This was usually done in the fall and a real treat for us youngsters back then.

This is where the Somerset County Memorial Park is, and where Herman Husbands lived, of 'Whiskey Insurrection' fame, at the Coffee Shop Farm, (restaurant), from 1785-1792. He used the unusual alias of 'Tuscape Death'. His mill was on Coxe's creek southward, mapped by John Wells in 1818 on the Melish-Whiteside map; the Husband Cemetery is up on the north side of Somerset Borough, but, it looks like I'm getting ahead of myself. Of course, earlier we passed Jones' Mill before leaving the Donegal area and Fayette behind us.

Bakersville
With the Cemetery as our main destination in Bakersville, off of Route 31 East, in Somerset, we continued traveling along the old 'Glades Pike' until arriving near at what is said to be the small Lutheran Church. Here commencing our final search, soon finding his grave and some other relatives, including what I believe was his wife, Mary. I did take these photos: 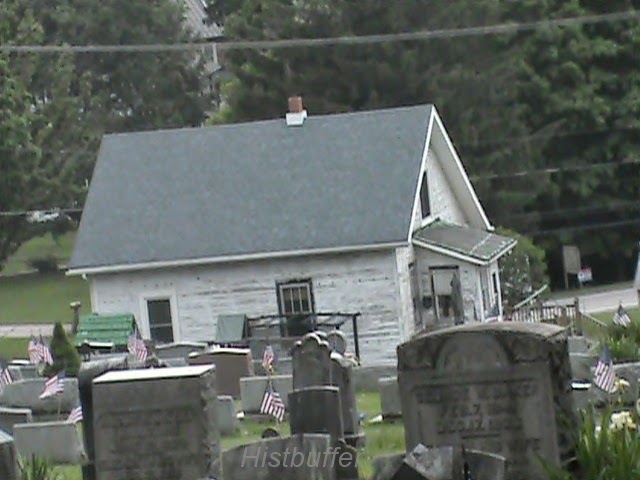 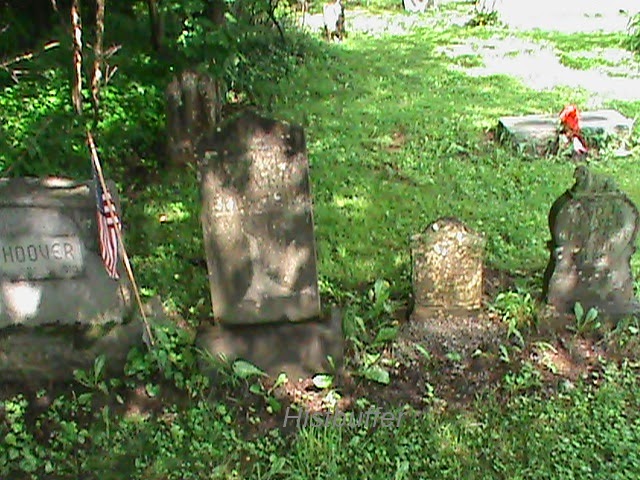 ﻿﻿     After paying our respects at what was a very moving moment, I can only take off my hat, bow my head and wonder what he was really like. Well, soon I was leaving the cemetery and driving on past the old historic rural buildings, back roads and such. We pushed our car all the way into Bedford. Past the Lincoln Highway's, somewhat mysterious, Jean Bonnet, (at the junction of Route's 30 and 31, and the old Forbe's and Burd roads as well, near Rt. 70), which has a late 1700's cabin from Fayette County and great food with a nice atmosphere for any weary sojourner, well, it gives you a real breather. I passed some old covered bridges  and where, oddly enough, I forgot to take more photos, can you believe that? To add to that, the camera wasn't well charged, so there you go. Sorry of being distracted with other things, BUT, I still managed a few worthwhile pictures; here's one: 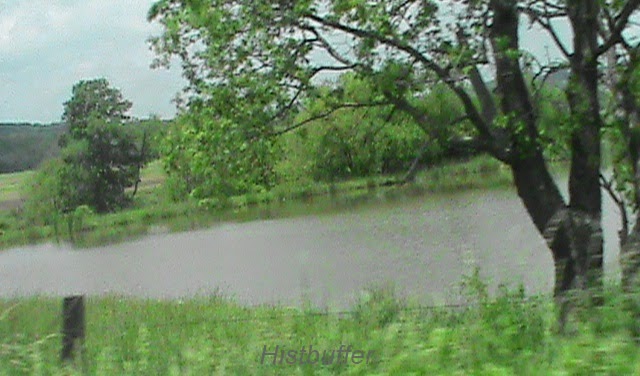 From here near central Somerset County we headed through the township of the same name fairly quick, angling through Stony Creek Township, near Raystown, partly through what I think was the old Dublin District, and part of Allegheny Township further into central Pennsylvania and thence, Bedford County. Next up, passing close to the very historic area of Shawnee Cabins. My dad used to take us fishing up here when I was a kid. A few miles east of Juniata Township into Harrison, near Mann's Choice further on the scenic Glade Road, is the old coaching tavern of Jean Bonnet's at the summt of Laurel Ridge and the Alleghenies. Back the opposite way at a place called 'Black's, (can anyone provide any material about an old tavern there?), near Brotherton, north of Berlin on the Mud Pike, lived the ancestors of the Supreme Court Justice Jeremiah Black. White Horse Road, 2023, is just east of Berlin of the German community. Mustn't forget Snyder of Berlin fame either! This seems to work better with Rt. 219 so one can also go left from coming west on 31 and travel the White Horse road southwest to 219.

But, anyway, this approaches to where the Joseph Filson's White Horse Tavern was near Dividing Ridge. And then to the area of the Conestoga Inn at Lavansville where the old Glade Road returned southerly to Rt. 31 again. Conversely, the Glades Road went back toward Donegal by Jone's Mill near Stahlstown. This leads down off the mountain by way of the Three Mile Hill to where you have the choice of staying westerly and straight on to Mt. Pleasant, or making a left toward the Mt. Vernon Furnace by way of Rt. 982 and using Interstate 119 to Connellsville. To many people, one good thing about traveling Somerset County is there are so many conjoining roads with names descriptive of historical significance helping to make an unfamiliar experience that much better. Just when someone may think they're getting lost, (and I am capable of such a befuddlement), you come upon an area giving a fair idea to where you went wrong. There are those kinds of signposts all around.

I realize this is just a mini-tour and not a travelogue as it turns out. This is simply what it was, as a journey to some of the places along the route through eastern Fayette, central Somerset and into Bedford. An ancestral quest beckoning me on as a bonus. For the readers' benefit I felt the need to point out the basics of a summer day trip through the heart of Somerset to Bedford and hopefully, I accomplished that much. Hey, at least there was No Rain.

Here is a view from the Dry Ridge area: 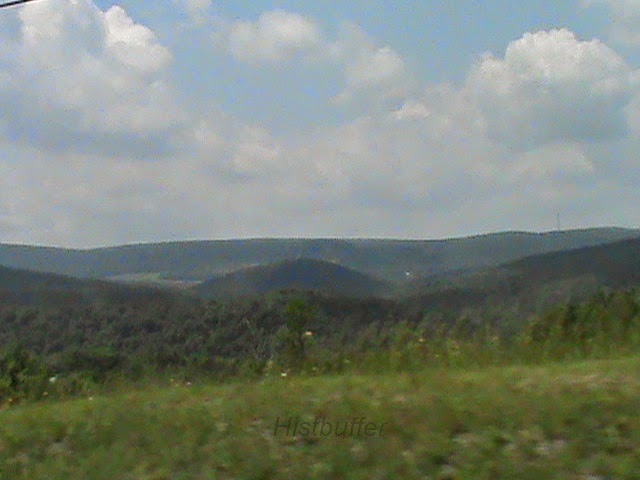 Once reaching Bedford we stopped at the popular flea market of 'Hoke-e -Geez' way over "that a way", past Shawnee State Park and the Lake and old Shawnee Cabins from Rt 96, a fascinating area full of archeological treasures. This is not far from Old Bedford Village and Fort Bedford Park, but, just where exactly you may ask? I bet you guessed part of it- Bedford Plaza. There is also 'We've Got Stuff' a few miles east of Everett. You name it, these places are sure to have some of it. I found a few items, mostly, some old silverware. Maybe I should think about melting it down! I will try to find another opening in my schedule to travel a bit and return to this beautiful area soon. Could be, I'll even get in one of those rare moods for an historical poem; you never know, crazier things have happened! More on that inclination another time. Bedford goes back to the mid 1700's and Washingotn brought the federal troops here to put down the Whiskey Insurrection in 1794, though, in fact he had been here before during the French and Indian War. Bedford was originally incorporated the next year. Well, a nice little getaway into the country and finishing up with a quick stop for ice cream sealed it as a pretty darn good, memorable day.

There isn't too much basic historical information cited for Somerset and Bedford for a reason: In the works I have an article about the origins of the surrounding counties, just so you know. Why bother to add this to the excursion post, it would end up being redundant. So, keep checking the blog,  alright?

As it's well to keep in mind when going off road around here, please try to remember,  there are sudden storms at times and copperheads and rattlers and wild animals are lurking nearby in the woods, so be forewarned and stay careful and still have fun. And maybe above all, learn something. Whatever you choose to do, if you plan to go hunting the game, swimming, or fishing the many lakes and ponds as well as the streams and rivers, here's to Somerset and old Bedford!

I may be rather slow on the rare occasion and a hair on the forgetful side. Yet, as certain as the sun will come up tomorrow or the moon will shine again soon, there will be a new post revealing a unique taste of our regional and local history uploaded SOON.
Posted by histbuffer at 2:34 AM