This was planned as an update to the Mt. Pleasant article. It made more sense to do a separate Post as there is a fair amount of material already there and some photos here. So, it deserved a separate page. This is about what happened in Morewood in the Connellsville Coke Region' in the year 1891.


The story behind the Morewood Mines and the Coke Works in the far southwestern part of East Huntingdon Township, in Westmoreland County partly depends on which side was paid the most attention to. This area is/was near to modern Route 119, on Rt. 981, which has been fleshed out partly through courtesy of the Mt. Pleasant Historical Society and a few other organizations, and some more information comes from the U. S. Geological Survey map of 1902, along with George Dallas Albert's early 1880's era,"History of the County of Westmoreland, Pennsylvania."

This was a fairly typical coal patch town served by the Southwest branch of the Pennsylvania Railroad, back around the turn of the century and eventually owned, by... you probably guessed it, H. C. Frick, through the early twentieth century. Carnegie, by then, his partner, reluctantly approved his decisions from distant Scotland, where he went to get away for a while.

The area was experiencing various strikes from the miners and the wage agreement had ended and there were rumors that the workers were to demand a shorter work day and higher wages. Regular clashes with mine bosses wasn't something new. It had been ongoing from the 1840's and was widespread. Also, the talk was mine and coke oven operators were going to insist on a wage cut as the demand for coke, which was used to fire the iron furnaces, was reduced at this time.

A lockout was threatened, so the workers walked out on Feb. 9th temporarily shutting down the mines. The situation was becoming desperate with the stress of the miners being evicted. This was happening in different degrees all over the region and other states, and things really deteriorated rapidly from there.


It is really hard to picture this desolate place with the burnt looking fields in a long, quiet valley as ever being else but what you see here now. It really struck me how the Massacre and the aftermath must of played out here. Just about everything appears reclaimed from the old village and the location of most else is largely a matter of conjecture, if not, completely forgotten. 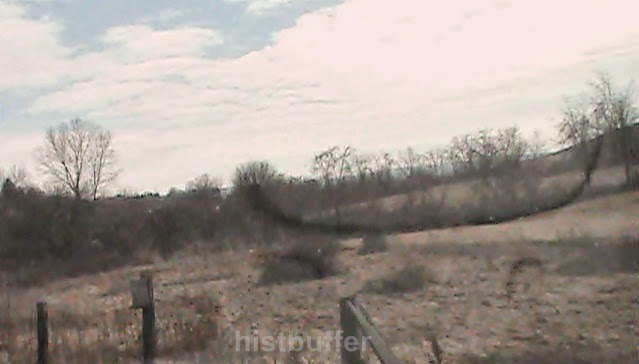 The fact is, there were over 600 beehive ovens operating and many hundreds of people lived here also in their huts and company housing. This was a mining community alright. "The one thousand tons manufactured here daily mean, therefore, sixteen hundred tons of coal mined in the same time. Rogers estimates that one pound of coal applied to the production of mechanical power through the agency of steam will exert a power equal to that obtained from ten hours' continuous labor of a strong man on a tread-mill". 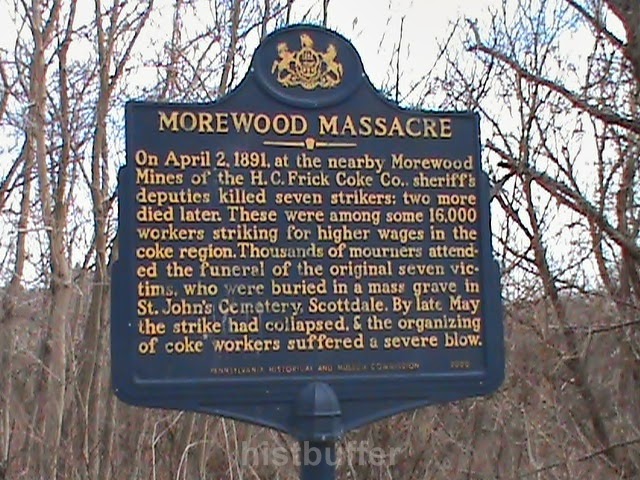 Between the pricing and wage situation with the coal strike, resentment toward non-english speaking workers fresh from eastern Europe, and their unexpected violent reaction in return; added to this, along with Frick's apparent philosophy of production regardless of circumstances, it brewed ill for the miners, in more ways than one:

The mine bosses worried over the newly formed United Mine Workers Union and were determined not to allow their influence to be brought to bear too strongly on the situation. By March 29, "a detective who had concealed himself in a house...overheard a plot being formulated by some Hungarian strikers to raid the Morewood Coke Works owned and operated by the H. C. Frick Coke Company, and to murder Robert Ramsay, one of the Frick company superindendents,(sic), and to burn his residence..." So, they were out to destroy the Main boss! This led to the general altercation, on April 3rd. "On the morning of the 30th 0f March, shortly after midnight, fully twelve hundred men made an attack upon the Morewood works...it was made by four divisions or separate bodies  of the strikers, each headed by a band of music. Starting out from Alice, Standard, Bridgeport and Bessemer respectively, which were mining villages near Morewood." There was also said to be 150 from Donnelly and Stonerville, maybe part of the force already reported. These works, which were the objective point, lie in a valley. "The men advanced and completely surrounded them and by their shouts and imprecations struck terror to the watching body of deputy sherrifs, for they realized that their smaller force of twenty men, although heavily armed, would be able to make but a feeble resistance..." Regardless, the strikers would not be denied their revenge and commenced to destroying the company's property, attacking whatever was in their path, doors, fences, wheelbarrows, tools, you name it.

Word had been sent to the Governor at Harrisburg  and there were also Pinkerton detectives brought to bear. This was later criticized as causing a lot of the problem, as it was felt in many quarters, they overreacted. Then the National Guard were sworn in as deputies, maybe not the wisest idea, by one Sherriff Dawson, so that it would seem the force was actually about 50 men, all totaled. Sometimes it appears that no one really knew who should be in charge or take the ultimate responsibility and that could be said for the uprising and insurrection as well.
"Here a surprise awaited them in the shape of Deputy Sheriff McConnell and Captain Loar..."a great many of whom afterwards declared that they were forced from their beds and compelled to join their ranks...the cry arose, "To Morewood! To Morewood!"
They first cut the telegraph wires leading out of Standard so that no warning would come ahead of them. It was stated in, 'The Riot In the Coke Region' of the New York Times, no less, that the lines were quickly repaired and the warning did get through.
The claim was made that some of the rioters fired weapons toward the guards, almost assuring a like response. They felt their numbers would bring success. They ignored warnings to halt and continued to shout threats.
The result was that rounds were fire into the mob and six were killed and three more were wounded, fatally so. It was claimed that upwards of 40 were wounded.

So that, though the main group was, on the 2nd of April 1891 over 400 miners from round about here that began marching, mostly from the Standard Shaft area up town and out toward Morewood, there were many more from other mines as well. In confronting the Mine leaders and Pinkerton Agents and special police, the results were in seven of them being gunned down and more wounded. This may of became an even worse scenario if it would of gotten further out of hand. They were buried in St. John's Cemetery in Scottdale. There were many mourners in the rainy crowds that day. Frick's policy was to consider it something that would have 'a good effect' ! This was a rough time for people with troubles concerning the unions and workers in different places as is well known. Many of the public in the nearby towns were actually said not to be very sympathetic to the violence began by the strikers either.

The court decision was, "Captain Loar and the deputy sheriffs who had been indicted for shooting the rioters at Morewood, were tried at the May term", and, convicted? sentenced? warned and fined maybe? Not so, "...at the May term of the Westmoreland county courts and acquitted. Some fifteen of the rioters were tried at the same term of court and convicted...the deputy sheriffs were tried ...and were acquitted..and thus ended the strike in the Connellsville coke region." Captain Loar himself vanished fast from the area, knowing full well the danger he was now in. Sheriff McConnel, stated that it was Loar, not himself that gave the order to fire, no one obviously willing to take responsibility, of course.


The after effects were still felt and retaliation from more miners was dreaded through the small towns nearby. "The opinion of the operators seemed to be that the withdrawal of the troops would tend to prolong the strike...meanwhile the evictions were steadily going on, which led to considerable rioting, owing to the strong resistance made by the Huns and Poles who were forced to leave the companies' houses...so the troops were kept on duty at the Mt. Pleasant Armory just in case of another violent episode occurred.
Just to give an idea of the panic that still ensued..." the water-tank at the Kyle works was blown up this morning. At Leith today a striker who was arrested, was rescued by from the deputies by a crowd of about two hundred and fifty strikers... and the statement by a disillusioned sheriff was added too, "At Leisenring today, my deputies were driven off by a mob, and the men who were at work were driven off by the strikers, and, owing to the dangerous and turbulent character of the rioters, I am unable to secure a posse adequate to the exigencies of the moment, (suppose this is one way to put it),  and I consider the power of the county exhausted." Well there you have it. Then the Governor caused General Wm. McCelland to contact the captain of Company C, 10th regiment at Uniontown to, "immediately put his command under arms and report with it to the sheriff, which was promptly done."

By all means, the troubles were not over, and this was a condition of a larger sphere, as Morewood was a microcosm in the whole crisis that was coming about with out any easy answers.
"At the close of the week ending April 18, there were 3,600 coke ovens operating in the district, and it was estimated that there were 2,500 men at work, but the strikers who wished to hold out were trying by every means in their power to intimidate the men who were willing to work and to keep them from working", it goes on almost relentlessly, "on the night of April 17, a number of dynamite bombs were exploded in close proximity to the Scottdale works..." Apparently they also 'feared' that they were bringing in Italian workers into the region to take their place. You might surmise that a new form of racism was growing out of this and was complicating the situation, on top of everything else.

Well, the report does go on to admit, "The operators themselves were not blameless in this matter. Desire for cheap labor seems to  has influenced them in employing men utterly unacquainted with our laws or customs," but it goes on to say, " unfitted in many respects to be associates of the better class of citizens, and, who, in time, acquired a knowledge that led them to be breeders of discontent and trouble...this affair clearly shows that there are considerations besides cheapness of labor in employing men-the peace of society, the safety of human life and property, which cannot easily be overlooked." It does seem there were points on both sides of the issue and the 'foreign laborers' didn't feel they had much to lose under the circumstances.

Here's a 1939 overhead photo from close to the area, of the NE division of the Dept. Of Agriculture:

Furthermore, from a Tribune Review article, dated Sept. 28, 2000, a Memorial was also dedicated for the deceased miners in St. John's Cemetery and at Morewood, by the Pennsylvania History and Museum Commission.

This was preceded by the huge tragedy of another type with the Mammoth Mine explosion on Jan. 27, 1891 where 109 miners lost their lives.

Thanks for reading through the article. I especially appreciate those of you that keep watch for updates.

Quotes from, 'Report by the Pennsylvania Bureau of Industrial Statistics', pages, 2, 5-7, 9-12. Courtesy, Google Books.
Posted by histbuffer at 4:17 PM