Winning The Most Forgotten Award!


This is certainly a very old Mill, long abandoned, that was once called Cathcart's, or Cithcart's back toward the late 1700's and supposedly, Hemminger's Mill from appr. 1875, with various ownership in the 1850's to the 1880's, including Swink, Mason and Long. It was called Spaugy's Mill since my Dad was young, (and he died after a protracted struggle, last year at 89 years old), as he was born nearby. He had stated that it was active within his memory. Does anyone know the year when the Spaugy's took over operation ? There was a 'Spaugy Store' there and apparently, the area nearby was known as 'Spaugytown' ! There were Clay's in the area that were said to be related. So far there isn't much other information available from this place that is very well known, and not much left of it either. There is ongoing  research being undertaken by Kim Brown President of the Bullskin Township Historical Society related in an e-mail discussion we've had recently as to any extra knowledge that could be provided.

There is always the off chance that I may run across an old spinster that invites me in some Sunday for lemonade and a brief trip to the attic for a look at some old black and white photos and a dusty, worn journal with all kinds of juicy details from a long time ago...well, it doesn't hurt to have a little fantasy now and then!
There may only be a handful of locals that are aware of it's more recent name and one reason being because about 15 years ago, before the road was renamed Keefer Road, the old name was Spaugy Mill Road. 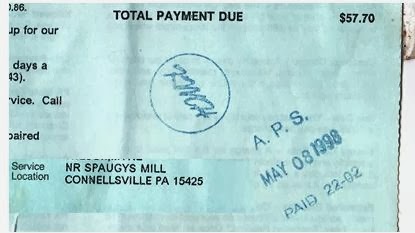 from an old bill


Lannie Dietle, a researcher and writer of the book, 'In Search of the Turkey Foot Road', and some of his associates, has quite a grasp of historical areas, if he doesn't mind my saying so, even more particularly on Somerset County and has the investigative patience of a saint and the determination of a well-trained bloodhound! He put in a whole lot of time and effort toward the old 'Turkey Foot Road'. I e-mailed him to inquire of this and he set me on the path, so to speak, of a fascinating, yet in many ways, obscure investigative journey on a 'packer' road that was once connected to minor paths originally carved out by the Indians themselves, and the northern area was eventually cleared by a industrious local fellow named Providence Mounts before he moved on southward. Lannie will be a guest blogger in a few weeks and it is something to look forward to.


A bit of a brief look at the history may be in order as a reference, (with a nod to the excellent research of Mr. Dietle).
The old Turkey Foot Road wended it's way from Maryland through Somerset in a circuitous route into Fayette County, coming down Quail Road toward Spruce Hollow and so it would seem, on by the Pleasant Valley Country Club, (the old Adam Hatfield tract), and apparently, very near to what became Rt. 982 and Spaugy Mill Road near the Woodale Fire Hall on the other side. There appear to be variations of the 'TFR' in this region. Additionally, when you make a left turn onto Rt. 982 from here E. Keefer runs up the hill south and driving past it, Spaugy Hollow Road goes up to the next right. It is not a through road any longer as I believe it accesses a farm up there. E. Keefer, or a route near it is a good candidate for the path of the Turkey Foot Road to Wooddale as further research on this blog relates with Jeff Hann's fieldwork south and north of Breakneck Road.

I personally had some relatives who lived in a rough circle very near the Detwiler Mill. From near Mt. Olive Church, up Spruce Hollow Road, past my great aunt Revenia Kenner's to where the old G. Hatfield place was located a few hundred yards up. Then at the top of the hill going left to Breakneck and the corner of Shenandoah where James Wilson lived in the 1800's and my grandfather lived on Keefer Road to the east as well. There is more material on my genealogy being added specifically here.

Now in the old days, keep in mind, Keefer Road appeared to end to the north, for all intents and purposes, at the old log cabin on the left about half way toward the Prittstown Road. So you can see it is, indeed, a curiosity and some speculation where the ancient road bed headed from this area, as it headed on toward Iron Bridge and beyond; an area that may just deserve to be the subject of a future post.

There is still a chimney stack, as you can clearly see and, until recently, part of a half buried building left as a remnant of those forgotten times of bustle and activity here. At least, I didn't notice any building remnants that were left. Maybe they were thought to be an eye sore ? I believe there were a few other buildings connected to it's function as a saw mill on the other side of Keefer Road years ago, but I wouldn't quote me on that.
Some info more toward the TRF areas can also be gleamed from Wallace's book on the 'Indian Paths of Pennsylvania/' and Veech's 'Monongahela of Old' from 1858.


Here in this quiet hamlet is a little, fairly short, piped tributary of sorts which runs, partly underground, to Mounts Creek, ( which runs southward of Greenlick Run), on the north and appears to have it's start from what may be a spring near a farm in the field to the east heading about two hundred yards on the south of 982 and then under the road toward Keefer Road northwesterly and back toward the old grist mill. This can also be seen on an old map from the 1870's. This was known as the 'mill race' by the old timers. It was quite likely used to turn the grinding wheel of a Mill. With a long history going far back, it still travels on, barely noticeable.

Here you see it marked as E.,(Emanuel), Mason S&G Mill:

For a nearly forgotten place it does seem to be attracting more attention. Kim Brown is continuing her research on this place and it's names and ownership and we look forward anxiously to any further discoveries.

Just a small word of caution if anyone decides to head out into the chilly air and take a look, the Keefer Rest Home is quite close by. The keyword is 'REST'.

Any additional material or a photo anyone has 'out there', please comment or send an e-mail to Histbuffer and you may also contact the Bullskin Historical Society which would really be appreciated, as you could help fill in some needed background information.

With information provided by the Bullskin Township Historical Society President, Kim Brown through research at the Uniontown Courthouse, she does confirm that the Hemminger moniker on the plaque is correct. This means that not only did a Hemminger once own the Detweiler Mill at the Pleasant Valley Country Club, but also did once have ownership of what lastly became known as Spaugy's Mill. Bingo!

Thanks for your interest in my blog and this post also.
Posted by histbuffer at 4:01 PM