Well, back up here with a newer Post for all you folks out there.

There are many cultural sights in Mt. Pleasant as well as the township of the same name. We might only get to the most interesting here, but, more could be added. Just imagine all those horses and wagons in the Diamond, and women in their finery; the wooden buildings and hitching posts. A brief, but succinct history lesson would probably be appropriate, so we'll manage to attempt just that.

Mount Pleasant is located near north of PA Rt. 819, not far from Route 119. When you come to the Doughboy, you are in the heart of the town. For some photos near the heart of the borough please check out the Mt. Pleasant Downtown post!


The borough of Mount Pleasant, one of the oldest places around here, was incorporated in 1828 and first settled by those of German descent. This was also the oldest borough in Westmoreland County. In 1798 East Huntington was slice off from the township which is off to the northwest, just to give some perspective to the early size of the place. By the way, Westmoreland County history takes us close to the dim past when it was still a part of Bedford County, and was formed in 1773.

Now technically, the town began in 1797 when it was laid out by Andrew McCready. This was in those old days when there were some odd laws on the books, (at least in certain parts of the country), such as, at times Catholics were not allowed to own land or build a church and in some places, only given half a vote! The Old Presbyterian Church of the very early 1800's was purchased by the Church of God in 1870. The denomination dates back to 1774. The United Brethren church added the tower in 1874 and in 1890 the rather famous and expensive clock was placed within it.

Let's hope you don't mind a few numbers, it really is necessary to get an idea of things.

Well, those involved with the 'tract' finally got the opportunity and paid out for the patent with the amazing sum of $8.37. Talk about inflation ! The price became higher later going for $18 an acre. T he township itself also has some associations with the Whiskey Rebellion. And there is also the Bunker Hill area, which was annexed in 1885.

The borough also had the 1907 L. E. Smith Glass Company, famous for it's work with colored types of finely worked glass and there is Lennox Crystal, with quality textured material, originally of the Bryce Brothers from 1896, with hand blown glass. The lack of this kind of productivity the place once shared has had a dramatic impact, though the sturdy nature of our surrounding townships lend themselves to adaptions and are managing fairly well. In the 50's there was Permali, Durasteel and Screw and Bolt, all within the township. Levin Furniture are still here on Main Street.

The area was bypassed early, (some say spitefully), by the railroads until the Mount Pleasant and Broadford Railroad, and eventually others came to the rescue. Then there was the West Penn trolley that served the area well from 1906 to 1952.

The Mount Pleasant Memorial Hospital was opened on January 1, 1904 from a private fund of Jacob Justice.

The area called 'Dutch Town' was the hole in the wall, a place where they say people went to wet their whistle in Prohibition days. Quite a place to live near, a few would probably be thinking!

Braddock's Road was authoritatively stated to of passed directly through the borough traveling up Eagle treet and out the Braddock Road to Sand Hill and passing over old 119 to the north and to what was known as Jacob's Cabins. This is an area I will revisit sometime. I would also like to gently point you in the direction of the Braddock Road Chapter, the National Society of The Daughters of the American Revolution for something of this aspect directly related with that era. They own the Warden Mansion where they have their meetings and also various promotions and contests and even their own library, so check it out. Sometimes we don't know what is in our own neighborhood! We can follow the Braddock Road signs around to get a better idea of the route the army took on their fateful way toward Braddock's Field.

It's also a good idea to hike around when you have time and check out some of the Coal and Coke trails between here and Scottdale.

Interestingly, there was also once a Grand Opera House that graced Main Street and there was a jail here too, until the late date of 1968. l will attempt to do some checking into this further. (Other information, whether historical, or just your take on things here, would be appreciated by any of you that want to contribute. A private e-mail is another alternative).


This coal patch called the 'Shaft' by locals, was very busy. A large amount of you will still remember the dust, smoke, and the bustle down there. Though first known as Spring Garden before 1873, it really got going as a coal and coke area in 1890, the streets were laid out in 1916 with the old Union Supply Company store on the corner of Diamond and High streets. Standard was said to have nearly 10,000 coke ovens, though maybe that's 1,000, though that would be rather low. Still, one of the largest  in the U.S. When the no. 2 and 3 mines were combined it was known as Standard Shaft. It was begun by A.A. Hutchinson and Brothers and then built up by H. C. Frick under Robert Ramsey's able supervision and still contains some old company houses. Is anyone else interested in this too ? Well, there is further information available to those more curious folks here and here, as to the houses, baking ovens and the mines themselves.

Here would be a nice place for a few of those stray anecdotes rather impetuously planned for the site.


For one thing, Samuel Clemens, Mark Twain himself was claimed to of come through the Mt. Pleasant area on business.
There was Jess Stairs state representative from 1977 to 2007. He came from here and  resides in Acme.

Other House representatives include Eugene Saloom and back further, Isaac Kine. More recently, Jess Stairs who lives in the heights of Acme and, as a friend pointed out, once taught a 9th grade class here, was a Republican representative served from 1977 to 2007 for the state.

A really great anecdote is sbout Al Capone, yes him, who also made his way here once on business heading toward Masontown. Unfortunately, there seems to be little, if any, other information available. Well, maybe that is just as well!

By 1925, the authorities had to put their foot down and prohibit the practice of cattle driving through the streets. The farmers and ranchers would lose out in this, but one should assume it led to a quieter and safer environment for a growing community.

We have a more honorable and regional mention up next, with John White Geary 1819-1873, who was a local son of Scotch-Irish immigrants, and once lived at Church Street. He was a highly decorated Civil War General and Governor of Pennsylvania with  his very own Historical Marker right by S. Diamond Street too. Geary Park is, of course, named after this man. He sure had a colorful career! In 1856 he was Governor of Kansas and he fought in The Spanish American War in Mexico, as well as becoming the Mayor of San Francisco. Involved in various battles in the Civil War, including, Gettysburg, while providing undaunted bravery at Culp's Hill; he eventually ended up out west and finally came to be military Governor of Savannah.

Moving further down Main Street, making a right at the light at the tavern and hotel, R x R Station, (without commentary, at least for now, of the ghostly stories associated with it's history, which is covered pretty thoroughly on other sites),

making a left behind the Fire Hall there, you will be on route that was said to contain the street car trolley. This old road went all the way to Iron Bridge. The condition is alright for a mile or so, though there are speed bumps, and then deteriorates fairly quick.

Also, there are some curious road names as most residents should be aware of, like 'Misty Meadow'. Sounds nice, but watch out for the road leading to it- 'Pole Cat Road'! Up North Diamond off of Depot is the 'Helltown Brewing' Co. Over by St. Pius X Cemetery is Braddock Street and there's a Washington Street too, the one with the cabins, then we have Liberty Street more southerly. The Coal and Coke Trail heads past the Baseball field on to Bridgeport. You also have FRONT Street, and what would it be without BACK Street; then Fry Hollow, Simpson Hollow and Brook Hollow Roads, all in the same area. But this is moving out of town a bit, so let's look at College Street, a long road, coming off of S. Church from the South side and Morewood Street to the southwest famous for the 'massacre'.

Finally, near the northwest side there is High Street and...Low Street as well. That about concludes this segment.

Let's not forget, though most probably have the area to the south west called Texas! You might have to look it up on an old map, like here: 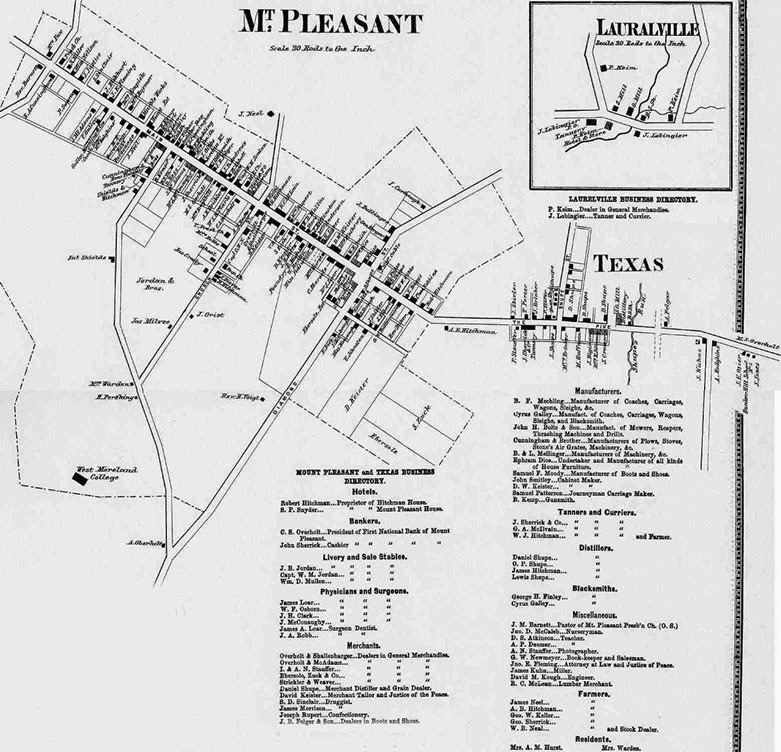 I'm no expert here, still, at the crossroads of Rt. 982 and Rt. 31, we have what originally contained Lobinger's Mills. Judge Lobinger is reported to of received almost a lynching at the time of the Whiskey Rebellion for his stance leaning toward the Federal side. He died in the Stone House nearby, a place of entertainment, in the year 1798. There are those of the same name still living in the vicinity.
Though very close to Bullskin Township, it is referenced here as it is 'just down the road' on the old Glade's Indian path. Also, well- it just needs to go somewhere!
This parcel appears to of been successfully contested by one Ralph Cherry from Lancaster and was then called 'Cherry's Mills'. As early as 1784 there was a request for a road from Laurelville to Uniontown. It can be observed on some old maps with a Toll House gate listed on the road which was near the small cut off road behind the apparent placement of the old Mill itself, off of Rt.31 and Rt. 982, starting toward Kecksburg. There was a saw mill, post office and country store right here as well.


It is interesting to see a reference to the Whiskey Insurrection and the visit of a famous Secretary of State to Laurelville in the late 1790's. More on that in the post of 'Whiskey Mania in Southwest Pennsylvania'. Please scroll two thirds of the way down to read it in Washington's Arrival and March.

In early May, I had the pleasure of meeting the Mt. Pleasant Mayor Jerry Lucia, in his role as Fire Chief. I enjoyed the occasion and was honored to have a talk with him for about an hour. We discussed a lot of old local historical subjects. As an added bonus, I had the opportunity to explain to him of my regional website, thank you very much. I must say, he is a very well informed, and likeable man. It was a real highlight for me.

For further interest, I also wanted to add a link to a Tribune article of a local man with  expertise of Indian artifacts around the region, here. This was alerted to me by a kind and helpful acquaintance from Connellsville area.